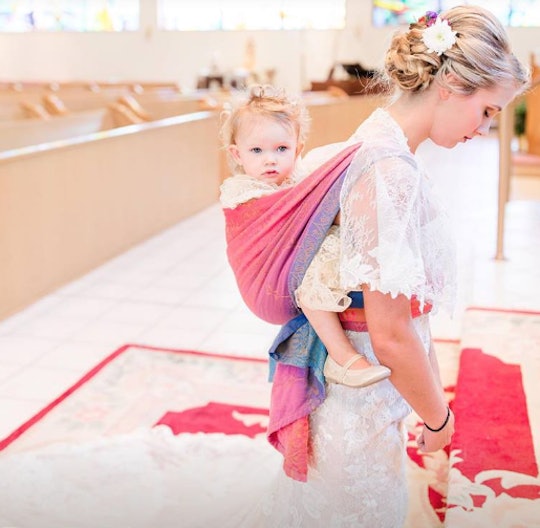 This Babywearing Bride's Photos Should Start A New Wedding Trend

I have been to a ton of weddings, no brag but I have. If I could, I would go to a wedding once a month because I love seeing how inventive people get when trying to incorporate their actual life into the fantasy one-day life of a wedding. Especially when little kids are concerned, because they're obviously the best part. And if you can incorporate one of those kids in a practical way, chef kisses all around. I was blown away by this babywearing bride's photos for just that reason; not only was this a practical way to incorporate her daughter into the celebration, it was also seriously gorgeous. I hope this becomes a trend as soon as possible.

Portrait and wedding photographer Laura Schaefer from Steubenville, Ohio shared photos from one of her client's weddings. As with most wedding photos, they were pretty beautiful. Sunshine-y shots, smiling bride with flowers in her hair and a baby on her back. Well, I suppose that last thing isn't all that typical. Which makes it all the more special. This bride, whose name is Dalton, wore her little girl in a gorgeous wrap on her back as she walked down the aisle. And the pictures have me wondering why this isn't already a thing.

After Schaefer shared an earlier photo of Dalton's dress on Facebook and casually mentioned she would be wearing her daughter, she apparently had people contacting her asking to see pictures. As she wrote on her Facebook page, Fire & Gold Photography:

Since I posted about her wedding dress yesterday, I got a few requests to see photos of how Dalton wore her daughter during her wedding! Here are some of my favorites! Such a stunning baby wearing bride! 👌🏻

Speaking of favorites, this photo of Dalton's daughter picking a flower out of her hair is mine. It can be yours too, if you want.

Schaefer told Romper in an email that the guests at the ceremony were "in awe" of Dalton and her little girl:

The people at the ceremony were in awe of not only the beauty of the bride and her daughter, but the beauty of the symbolism that wearing her down the aisle signified. I’d say the most emotional part was when Dalton first put Ellie into the wrap. You know when a bride puts on her veil on her wedding day and it completes the look? She looks like a bride and everyone stares in awe. Well when Dalton put on Ellie, the look was complete. Everyone in the room where she was getting ready, including myself, were taken aback by just how beautiful she looked, wearing her sweet daughter on her. She looked like a bride and mother and that was perfect.

She also noted that the mother of the bride was the one who wrapped Ellie up in the first place, which was special:

Dalton’s mother helped her wrap Ellie up and I was struck by the beauty of the scene: a grandmother, helping her granddaughter into a wrap, to be worn down the aisle at her mother’s wedding. Three generations in one image.

Wedding guests weren't the only ones who loved this babywearing bride; Schaefer told Romper that the response to her photo session has been overwhelmingly positive:

The reaction on Facebook has been overwhelmingly positive! I had never expected this post to get so much engagement, but clearly there’s something about it that makes people stop, click, comment and share! It started by me posting a photo the day before of Dalton’s dress and writing about her wearing her daughter. People started asking for photos of her wearing Ellie so I changed the scheduled post for the next day to be photos of Dalton baby wearing in her wedding dress. And it took off from there! I’ve really enjoyed reading people’s comments about how they want to do this in the future. It’s also been neat to see photo comments posted by mothers who did this at their wedding too! I’m excited that this post has inspired so many to include their children in a special way in their weddings.

It's pretty lovely to see that babywearing is becoming so much more popular and accepted, especially considering it can make life a whole lot easier for parents who have to get things done but don't want to leave their baby. Like weather forecaster Susie Martin who wore her son to work (where he promptly fell asleep against her back) in honor of International Babywearing Week in October, as per the Mirror.

As sweet as that was, nothing beats a babywearing bride in my book. Especially when your carrier is as gorgeous as the one Dalton used, which you can order here (though it's currently out of stock, perhaps because seeing it inspired so many).

The reality is, weddings look different to so many people. And if you want to include your baby in a way that's easy and natural and sweet... I think babywearing might be the way to go.

More Like This
Over 10,000 Sippy Cups & Bottles For Toddlers Recalled Due To Lead Poisoning Hazard
Celebrate Baby's First Christmas With These 40 Instagram Captions
The 16 Best Subscription Boxes For Every Kind Of Kid
41 Boy Names That Start With “G”