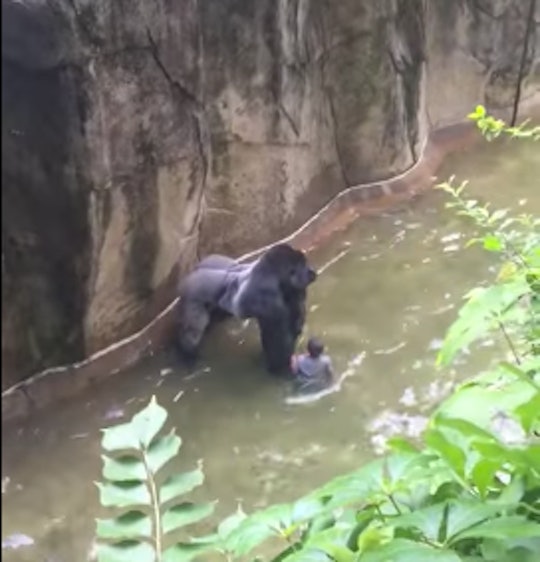 The Internet has been up in arms following the death of a 17-year-old gorilla at the Cincinati Zoo over the weekend after a young boy fell into the animal's enclosure — and, at first, it's really easy to see why. After all, Harambe, the silverback gorilla, was just minding his own business when the child entered its space, but fear for the boy's safety led him to be shot and killed. The bulk of the outrage hasn't been directed at the zoo or any of the individuals involved in making the decision to kill the animal, though, but instead at the boy's parents, with many people calling them neglectful, awful parents who deserve to be criminally charged. In a recent post, Brenna Jennings documented her own scary experience bringing her kids to the zoo, and this blogger's take on the gorilla shooting is a reminder that we shouldn't be so quick to judge other parents — even when it involved a tragedy that seemed entirely avoidable.

Harambe's death is no doubt a tragedy, and the entire situation is truly very sad. But amidst the vitriol being spewed at the parents, some parents are coming forward themselves to advocate for the little boy's family, arguing that it could have happened to any parent, and their stance is important.

According to TODAY Parents, after the zoo incident made headlines, Jennings took to her personal blog, Suburban Snapshots, to pen a piece titled, "Any One Of Us Could Be The Cincinnati Zoo Mom." In it she shared a story of briefly losing her daughter at the zoo herself, after the little girl darted off while she'd turned to say goodbye to friends they'd been visiting with. Everything turned out to be fine — it usually does — but of course, it was scary, and a reminder that a virtually unlimited number of horrible things can happen to our children at any given moment when our backs are turned. She shared other stories too, of accidentally walking into the wrong apartment when she was 5, or of a friend's 2 year old who'd recently wandered off while at the park. The point, she said, was that no matter how hard you try to be a watchful parent, sometimes kids run off. Eventually, almost all parents learn this the hard way. Jennings told TODAY parents,

What I wanted to get people to stop and think about were all the times they had a slip, and to recognize that any of our own events could have ended badly — that we just got lucky.

The parents of the little boy at the zoo got lucky too, at least in the sense that their son is alive and unharmed. But what must it be like for them now, having to live with the intense weight of the internet's collective scorn and judgment, following what was surely a traumatizing event for them to begin with?

Earlier this year, my own 3-year-old son quietly slipped out the front door while I was in the kitchen and my husband was upstairs, both of us mistakenly thinking the other was watching him. He'd walked two houses down to a neighbor we know well, and was perfectly happy and safe, but in the time that it took for me to realize he was gone and to find him again, I felt as though my world had crashed down right in front of me. Once I brought him back home, I was a wreck — a frantic, sobbing, guilt-ridden wreck — and that was without having a worldwide audience of other parents judging me for my mistake. Believe me, I was well aware in that moment of all of the terrible things that could have happened, and of all of the reasons why any of those outcomes would have been my fault. I cannot imagine how it would have felt if my Facebook feed were also full of people demonizing me for it, or if I'd been charged as a neglectful parent.

To be fair, no one had to shoot an innocent gorilla because my son ducked out the front door. But if it were me — if it were my son, my mistake — I would be endlessly grateful that there were people there doing whatever it took to keep my child alive.

And, according to a now-viral Facebook post from former zookeeper Amanda O'Donoughue, the zoo's actions were entirely necessary from a safety perspective, regardless of what it looked like to bystanders (or to the YouTube peanut gallery watching the footage after the fact). In her post, O'Donoughue is sympathetic to the loss of Harambe, but says zookeepers would have understood the danger the boy was in better than anyone else:

Gorillas are considered 'gentle giants' at least when compared with their more aggressive cousins the chimpanzee, but a 400+ pound male in his prime is as strong as roughly 10 adult humans. What can you bench press? OK, now multiply that number by ten. An adult male silverback gorilla has one job, to protect his group. He does this by bluffing or intimidating anything that he feels threatened by.

Gorillas are considered a Class 1 mammal, the most dangerous class of mammals in the animal kingdom, again, merely due to their size and strength. They are grouped in with other apes, tigers, lions, bears, etc. While working in an AZA accredited zoo with Apes, keepers DO NOT work in contact with them. Meaning they do NOT go in with these animals. There is always a welded mesh barrier between the animal and the humans.

She also explained that, yes, it actually would have been very easy for the boy to fall in, even if his parents were paying attention:

In more recent decades, zoos have begun to redesign enclosures, removing all obvious caging and attempting to create a seamless view of the animals for the visitor to enjoy watching animals in a more natural looking habitat. [This] is great until little children begin falling into exhibits...which of course can happen to anyone, especially in a crowded zoo-like setting.

I have watched this video over again, and with the silverback's posturing, and tight lips, it's pretty much the stuff of any keeper's nightmares, and I have had MANY while working with them. This job is not for the complacent. Gorillas are kind, curious, and sometimes silly, but they are also very large, very strong animals. I always brought my OCD to work with me. checking and rechecking locks to make sure my animals and I remained separated before entering to clean.

As for the argument that Harambe was simply trying to help the little boy? O'Donoughue isn't buying it:

I keep hearing that the Gorilla was trying to protect the boy. I do not find this to be true. Harambe reaches for the boys hands and arms, but only to position the child better for his own displaying purposes. Males do very elaborate displays when highly agitated, slamming and dragging things about. Typically they would drag large branches, barrels and heavy weighted balls around to make as much noise as possible. Not in an effort to hurt anyone or anything (usually) but just to intimidate. It was clear to me that he was reacting to the screams coming from the gathering crowd.

Many zoos have the protocol to call on their expertly trained dart team in the event of an animal escape or in the event that a human is trapped with a dangerous animal. They will evaluate the scene as quickly and as safely as possible, and will make the most informed decision as how they will handle the animal. I can't point fingers at anyone in this situation, but we need to really evaluate the safety of the animal enclosures from the visitor side. Not impeding that view is a tough one, but there should be no way that someone can find themselves inside of an animal's exhibit.

What O'Donoughue and Jennings (and countless others) have argued is that it is terribly easy and unfair for us to look at the parents and chalk this tragedy up to carelessness on their part. Even worse, some commenters have suggested that the boy fell in because the parents "raised a brat" (seriously?!), or that, as his parents, they also deserved to be shot. There is no doubt that the loss of Harambe is heartbreaking, and that it wouldn't have been a million times better for everyone involved if the little boy hadn't made it into the enclosure to begin with. But he did. And now, in the aftermath, maybe it's time to practice a little empathy.

It could have been any of our children. And if it had been, the very last thing we'd be needing at this moment is cruelty and judgment.