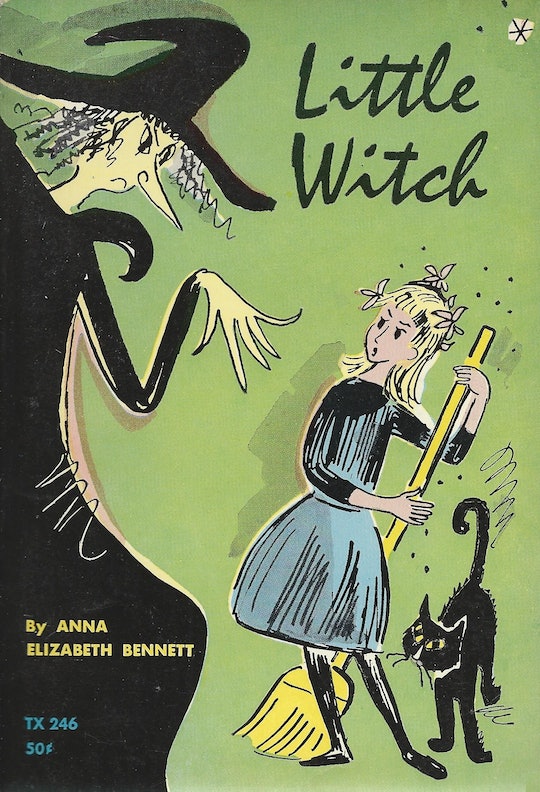 When I was little, I felt I’d gotten a doubly raw deal: I was adopted and my mom was mean. I was raised in a big city as an only child and a latchkey kid. My parents both worked, and I generally avoided my mother as much as I could even when she was home, so I was alone a lot. On Fridays after school, I would stop at the library on my way home and check out as many books as I could carry, then spend the entire weekend lying on my floor on my belly, reading. I read at the table, I read under the covers at night with a flashlight, I read in the bathtub, I read all the time. I often got so lost in books that I read them over and over and over.

One of my favorite books as a very young child was Little Witch. I read that book so many times that even as an adult I can recall entire passages. Oh, how I identified with Minx! She did not want to be a witch’s child, and neither did I.

Minx was never allowed to go anywhere with other children, and neither was I. Minx felt so deprived that she snuck out to go to school and had children over in secret, and I felt so deprived that every time I went on a playdate I hoped and prayed that I would be able to stay there forever. Minx had to clean up after her mother in the dark, dirty house they lived in, and I hated the way my parents were borderline hoarders, piling things up everywhere, never cleaning anything thoroughly, yet expecting me to wash and clean. Minx choked down bats and frogs on toast. My mother cooked every single day, but with short-dated ingredients, from dented cans, toasting old bread with the moldy corners cut off. We had thin, bluish powdered skim milk that made me gag when I tried to brave it. Everything was bought with double coupons, rain checks or on sale. Minx’s clothes were old and dirty; mine were from the Salvation Army. We both envied our friends their clothes, their homes, their families, their freshly baked cookies. Minx desperately wanted to be adopted by a better family, and I did too.

The one thing Minx had that I did not was magic. She might have lived in a dark and dirty witch’s house, but there was enchantment all around her.

Everybody knew Minx was a witch’s child and they teased her relentlessly for it. I got teased because my mother was fat, because my clothes were ugly and all second-hand, for my stupid last name, and the weird spelling of my first name. Worst of all I got teased for being a crybaby. I cried all the time because I thought if I did, people would ask me why I was sad and give me the opportunity to confide in them and then maybe, maybe they would help me. Minx knew the neighborhood kids feared her mother because she turned bad kids into flowerpots whenever she had the chance. My mother was nice to everyone but me. I felt like her meanness was my darkest secret, one that no one would ever rescue me from. And I wanted so badly to be rescued.

The one thing Minx had that I did not was magic. She might have lived in a dark and dirty witch’s house, but there was enchantment all around her. I looked for magic everywhere but never found it. Where Minx caught glimpses of a beautiful fairy every time she spun around in the mirror, I stared at my reflection and felt empty. Night after night, Minx took pinches of this magical powder and that, and threw it all into a cauldron to see if she could conjure the fairy. I felt powerless to bring anyone to my aid, so I stayed silent. I’d always been told that my birth mother couldn’t keep me. What I heard was that she’d never wanted me, so I felt trapped where I was.

Minx was braver than I. She crept past her sleeping mother and sneaked off to school. She made a friend, a girl named Frances. Frances didn’t have it so easy either — her mother had died and she and her siblings were being raised by their grandmother. But her grandmother was affectionate and loving, the house was clean, there was always delicious food to eat and pretty dresses to wear. Minx felt welcomed as a member of the family on the very first playdate, luxuriating in the bathtub, using sweet smelling soap for the first time, borrowing a clean dress, gorging herself on normal food. I wanted to be taken in that same way. Every time I was allowed to go to a friend’s house, I would plead silently with my eyes, imploring the parents to intuit how much I needed them to give me nicer things than those I had, feed me better food, offer me whole milk that came in a carton instead of in a revolting powder. I needed them to save me. If Minx could have that happen to her, I thought maybe it could happen to me. But it never did.

My mother never once told me she loved me, so I naturally assumed she didn’t.

Minx never knew she was adopted, so when she finally breathes “I love you,” to the fairy in the mirror, not knowing that would break the spell that trapped her there, she does not expect the surprising turn of events that ensue, changing her life forever.

The words “I love you,” changed everything. The fairy had been jinxed by the witch years ago and had her baby stolen from her. Minx was that baby, and love was the only thing that could break the spell. The witch lived in a world so devoid of love that a spell like that seemed to her like a sure bet.

Maybe I had always known I was adopted, but since I believed my birth mother gave me up because she didn’t want me, I never actually expected to meet her. Instead, I felt forgotten. As a kid, I decided I would never look for her. I assumed she’d slam the door in my face and go back to her life, which I figured had to be more amazing without me. I had no reason to think otherwise. My mother never once told me she loved me, so I naturally assumed she didn’t. Obviously, someone who gave birth to me and then gave me away couldn’t possibly love me either.

Minx was rescued, reunited with her real mother, received with open arms and rechristened with her beautiful fairylike birth name, Minikin. There was no question where Minx would now live. To Minx, getting to go home with her fairy mother was even better than getting to live with Frances and her sweet grandmother. She got to stop being a witch’s child for good. She got to go home. My mother told me that I had not been named before I was adopted, so I knew no one was coming for me. I would have to be brave like Minx and embrace my own little witch. If I wanted my life to change, I would have to find my own magic. Eventually I did.

Saying "I love you" to my own children every single day has been healing for me and magical for us all.