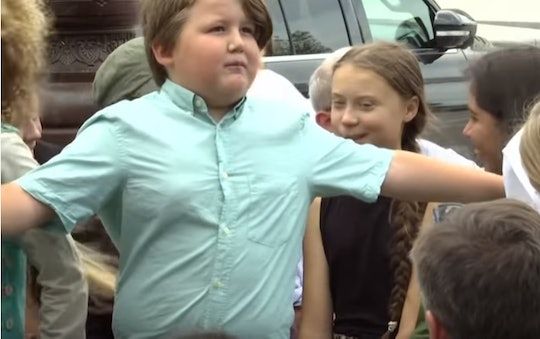 The name Greta Thunberg has become something of a rally cry for climate change activists. At just 15 years old, the outspoken Swedish girl began her quest to force politicians to do something about climate change other than just talking. She is fierce and relentless and driven. But she is also still a kid, who sometimes needs a little back-up as she takes on the world of adults who refuse to listen to reason. And that's why this young boy guarding Greta Thunberg is my favorite hero today. Sometimes a hero needs a hero herself, you know?

Thunberg was visiting Capitol Hill in Washington, D.C. on Wednesday to testify in front of the House Foreign Affairs subcommittee at Congress about climate change. She and other students were on hand to try to explain to actual grown adults why they need to pay attention to scientists who say that the world is in danger and something needs to be done. While the young activist was gathering her thoughts outside of Capitol Hill and preparing herself to deal with potentially nonsensical questions, photographers starting snapping photos of her. And one boy in particular was not having it.

As photographers continued to snap away at Thunberg, one young boy was captured in a video shared by The Guardian rising up like a sweet angel to spread his arms out in front of Thunberg and block her from view.

In the video, please notice the fact that Thunberg is straight-faced and serious before this hero boy stood in front of her, shielding her like it was the role he was made for. And once he stood up, her face broke out in a grin. Because guess what? This girl is practically carrying the entire weight of the planet on her shoulders and sometimes she needs a little help.

While the young boy who helped her has not been named, he has already won the hearts of the internet. Including New York Rep. and Green New Deal author Alexandria Ocasio-Cortez, who re-tweeted the story about Thunberg's boy bodyguard and wrote, "For everyone who feels confused about how to act in 2019, #GenGD is a great example for the world."

For her part, 16-year-old Thunberg managed to testify in front of Congress with calm, reasoned intelligence. She stood in front of a room of accomplished adults who would probably intimidate even the toughest among us and stated her case.

"Please save your praise. We don’t want it. Don’t invite us here to just tell us how inspiring we are without actually doing anything about it because it doesn’t lead to anything," she told members of Congress, according to Newsweek. "If you want advice for what you should do, invite scientists, ask scientists for their expertise. We don’t want to be heard. We want the science to be heard. I know you are trying but just not hard enough. Sorry."

Greta Thunberg and her sweet boy bodyguard are the best of us. The next generation who are unapologetic and passionate and focused. I do not want to hear one more word about "kids today" unless you are singing their praises, OK? OK.