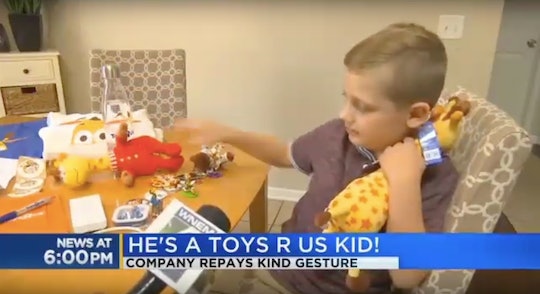 The generosity of children is one of the more heartwarming things on the planet. Kids will find the kindest ways to give back and help, wherever and however they can. Recently, an 8-year-old Michigan boy sent $3 to help save Toys "R" Us from closing its stores. As you can imagine, his generous $3 donation didn't go too far, but the thought this sweet boy put behind it and the gift he received in return were all so sweet, this is definitely one of those stories that will leave you smiling all day.

For many, Toys "R" Us was very much a consistent presence in their childhood. It wasn't always the place you went to get toys, but it was like every kid's dream destination. And pretty much everybody knew (and loved) Geoffrey the Giraffe, Toys "R" Us' long-time mascot.

The company was originally founded in 1948 by Charles P. Lazarus under the name Children's Bargain Town, according to The New York Times. But, in 1957, Lazarus opened his first store dedicated to toys and so began the history of Toys R Us. But in June 2018, after serving generations of children, every Toys "R" Us store across the United States officially closed their doors, which was part of a long liquidation process, according to CNBC.

Well, one boy in Michigan, as reported by ABC News affiliate WJRT, took it upon himself to give a little something back in hopes of saving his favorite toy store.

Bradley Bridges is an 8-year-old boy from Swartz Creek, Michigan. After hearing that the toy store was set to close its branches, Bridges felt that he needed to do something in order to help save them. "Toys R Us is closing because of Amazon or Walmart," Bradley told WJRT. "I just give back by using three $1 bills."

At first, Bradley's parents were a little skeptical. Realistically, after all, $3 isn't enough to save a company from bankruptcy, but who wants to step on a kid's desire to help out?

"I was shocked. At first I didn’t believe him and what his intentions were. And then when he insisted on sending this $3 to save Toys R Us, my wife and I said OK," WJRT reported Bradley's father, Tom Bridges, as saying.

If that wasn't sweet enough, what happened next certainly will be.

The family largely forgot about the money they had sent back in September, according to FOX News affiliate WDAF. Then suddenly, in late August, a surprise package arrived in the mail for Bradley Bridges. It was filled with gifts from the company, which Bradley proudly shows off in a filmed interview with WJRT, from ear buds and a water bottle to Geoffrey Giraffe himself.

Toys "R" Us ended up shutting their doors for a variety of reasons. Although some might be quick to cite online shopping as the main cause (and, sure, large online outlets didn't help), CNN noted that Toys "R" Us also struggled with debt. This debt, according to CNN, made it difficult for the company to properly invest in its own stores. After closing, Toys "R" Us shared an emotional goodbye message on their website:

Thanks to each of you who share your amazing journey to (and through) parenthood with us, and to every grandparent, aunt, uncle, brother and sister who's built a couch-cushion rocket ship, made up a hero adventure, or invented something gooey. Promise us just this one thing: Don't ever grow up. Play on!

Bradley's package, according to WJRT and WDAF, came from one of the last remaining employees working at the company's headquarters.

"Even though he might not have made a difference, but maybe it did, you know, give a good example to some of those that are out there. There’s a lot of kids that probably felt like him that were a little upset,” Bradley's father told WJRT.

This final, sweet gesture shows just how great of a company Toys "R" Us was. But major props to Bradley, for his own attempts to help, and hopefully Toys "R" Us' gesture of kindness sticks with him through the years to come.