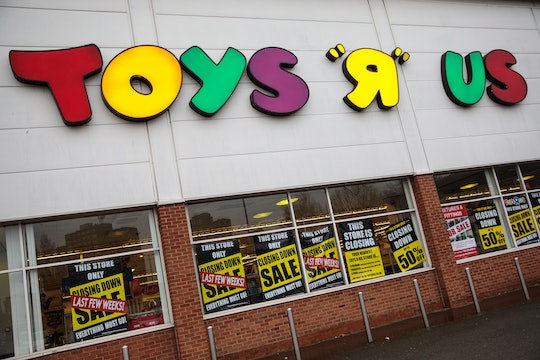 Toys "R" Us Will Reportedly Close All 800 Of Its U.S. Stores

If you have a Toys "R" Us gift card sitting in your wallet, now would be the time to go on a shopping spree. (Your kid definitely won't argue with that.) According to a report from the Washington Post, Toys "R" Us will reportedly close all of its 800 stores in the United States, a move that will allegedly affect 33,000 jobs. Toys "R" Us did not immediately respond to Romper's request for comment, and the retailer has not yet disclosed when its stores would be closing.

The outlet's source is simply a "source familiar with the matter," but there's a lot of evidence that supports the rumor. The toy store chain filed for bankruptcy back in September. In January, the retailer announced it would be closing up to 182 of its stores. Last month, it was reported that Toys "R" Us would be closing an additional 200 stores. Earlier today, news broke that all U.K. locations of the store would be closing. And just last week, reports surfaced that Toys "R" Us was possibly planning to shutter all of its remaining stores — and now, as the Washington Post noted, that's reportedly the case.

“The liquidation of Toys 'R' Us is the unfortunate but inevitable conclusion of a retailer that lost its way,” Neil Saunders, managing director of the research firm GlobalData Retail, told the Washington Post in an email. “Even during recent store closeouts, Toys R Us failed to create any sense of excitement. The brand lost relevance, customers and ultimately sales.”

As the news broke this afternoon, many took to Twitter to express their disappointment. After all, the toy store chain has been around for more than 60 years, since 1957.

Some people had jokes.

Others had more politicized opinions on the matter.

Some people on Twitter who identified Toys "R" Us employees even tweeted about the news. "I am losing my job. It is basically confirmed that all Toys R Us stores are closing," wrote one Twitter user. "I'll miss the children, the customers, and my coworkers. :( I have to look for another job now."

Allen Tran, who goes by The Brick Fan on Twitter, tweeted about the news as well. Romper spoke with Tran, who is a part-time employee of Babies "R" Us (which is owned by Toys "R" Us) via Twitter DM.

"I heard [that all the stores were closing] from the news. I actually go back in tomorrow so I'm assuming the managers will tell us then," he writes to Romper. He added that his managers have not told him any other information, despite the rumors that have been swirling in the news. He tells Romper:

The managers have been quiet about it probably because they didn't any new information. I do not know how much more time we have there. All we've been told was that the store would be open.

As for that joke I made about gift cards earlier, Toys "R" Us gift card owners actually may want to get a move on things, especially if they're in the United Kingdom. The store's website previously stated that gift cards would only be accepted in the United Kingdom through Sunday, March 11 — which has already passed. Fact-checking website Snopes looked into the matter, and the website confirmed that that was true.

However, Snopes claimed that it attempted to purchase something from the U.S. Toys "R" Us website with a gift card midday on Wednesday, March 14, and all seemed fine. Regardless, if you are currently in possession of Toys "R" Us gift cards, it's definitely a good idea to spend them ASAP. If the children in your life aren't currently in need of more toys, you can always buy toys and donate them.