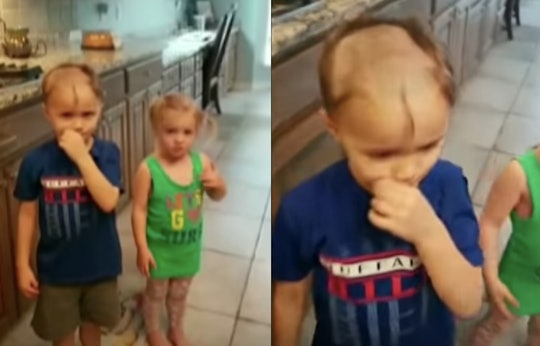 Sometimes when you're a mom you just want to have a shower alone. I know, it seems like a lot to ask but it's just one of those things that makes you feel human again after being with kids all day. Sure, showering while the kids are running around leaves you in a vulnerable position, but I can tell you from experience it's a risk that feels worth taking. Sometimes it turns out fine, other times not so much. This video of a boy shaving his younger siblings' heads, as well as his own, while his mom showered is one of those not-so-much times. And, I have to say his mom's reaction was surprisingly composed, considering.

Stephanie Plunknette is a married mom of three from San Antonio, Texas, according to PopSugar. Recently she was apparently trying to get ready to go to work the night shift at her job while she was alone with the kids since her husband was on the day shift. As she explained on Jimmy Kimmel Live!, she explained that she felt fairly certain her oldest son Teddy and his younger siblings Eloise and Fred would be fine but she forgot one small detail.

Earlier in the day she had shaved the dog and left the electric clippers out. And I think you can all figure out what comes next...

Plunknette shared a video in real time on her Instagram Story, where it eventually went viral and was shared on Twitter as well. She is crying in the video, and zooms in on a shamefaced Teddy whose head is partially shaved with some pretty sad wisps still holding on. She then moves to Eloise and has a look at the back of the little girl's hair; it seems Teddy made a styling decision to keep Eloise's hair the same in the front and just shave off the back.

This poor mom is clearly distraught, but here is what is so amazing — before the end of the video, which is less than two minutes long, she has pulled herself together. She even laughs and says, It's OK, mommy is OK, it's just hair."

When her little girl Eloise says "Mommy I look like a boy," Plunknette is calm and steady, telling her instantly, "No you don't look like a boy, you're a beautiful girl. It's only hair, we'll make it work."

I mean, color me impressed. And color Twitter impressed, too.

This mom's calmness in the midst of head shaving chaos has actually ended up working in her favor in some unexpected ways. After her video was watched more than 836,000 times, she and her family were interviewed on Jimmy Kimmel Live! about their experience and the host surprised the family with a trip to Disneyland. As Kimmel put it, "The moral of this story is, if you shave your siblings' heads you get to go to Disneyland."

The real moral of the story is, in my humble opinion, that kids are going to get into serious nonsense when you're not looking and you can either have a meltdown or roll with it. Rolling with it gets you a trip to Disneyland.