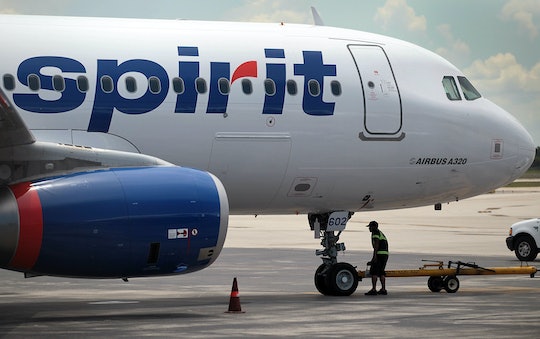 Picture this: you're on a packed airplane with your parents and a 2-year-old. The flight is repeatedly delayed. You need to breastfeed your child to keep him calm for the upcoming flight. And somehow, you end up getting booted off the flight. This is exactly what Mei Rui alleges happened to her: the breastfeeding mom claims she was kicked off Spirit Airlines, and the story is befuddling, to say the least.

Mei Rui, a Houston-based concert pianist and cancer researcher, was traveling with her 2-year-old son and her parents from Houston, Texas, to Newark, New Jersey on Friday. The flight was delayed for three hours due to weather issues, as Rui noted in several Facebook posts, and she was reportedly breastfeeding her son when a flight attendant came over to let her know they would be taking off. According to Rui, the flight attendant asked her to buckle her son into his seat, and she told The Washington Post she planned to comply but needed a few extra moments to feed her son:

I asked for just a couple more minutes to finish because if he woke up at that point he would have made a lot of noise. I said, ‘I promise I’ll finish before you close the plane’s door.’

Rui wrote that she stopped feeding her child as the flight attendant walked away, and of course he started crying. She says his crying continued for some time, and from there, it seems, the situation devolved.

Neither Spirit Airlines nor Mei Rui has responded to Romper's requests for comment.

According to Rui, who filmed the incident on her cell phone, once her son began crying a flight crew member told her she would have to leave the plane. Despite the fact that she claims she had already strapped her son into his seat as requested. As she told The Washington Post:

It’s not like I was resistant, I put him in the seat. If they had shown a little compassion, it wouldn’t have happened, they didn’t have to let it escalate.

As Rui was filming with her phone, people on the flight were asked to turn their phones off. And then everyone was asked to deplane. Rui claims she was met by law enforcement officials when she exited the plane, as well as a representative from Spirit Airlines who told her she could not get back on the plane. Rui claims the representative refused to explain even when Rui asked repeatedly for a reason. As she told CBS News, her son was making "very loud noises, but that's not criminal."

Spirit Airlines released a statement regarding Rui and her family's ejection from the flight, standing by the decision of the flight attendant to remove them.

Our records indicate a passenger was removed from Flight 712 after refusing to comply with crew instructions several times during taxi to runway and safety briefing. To protect the safety of our guests and crew, FAA regulations and airline policies require all passengers to stay seated and buckled during takeoff and landing.

Rui quickly refuted the statement by Spirit Airlines, according to The Independent, writing on Facebook:

Shame on you Spirit Airlines for fabricating more lies! The whole plane of passengers can testify that the plane’s door was still open, was stationary at the gate, NOT in taxi mode as your statement says.

She reportedly received a full refund for her missed flight, but she said won't be flying with Spirit after the "humiliating" experience, according to CBS News:

It was humiliating to be chased off a plane in front of hundreds of people. We had never been through anything close to this. We're not lawbreakers or trouble seekers. We're the elderly, a baby and his mother, why did they have to treat us this way?

Whether the airline felt justified for removing Rui and her family from the flight, it seems communication was lacking during the incident. Airlines keeping open and clear lines of communication about their directions to passengers and will happen if someone doesn't follow directions might help prevent incidents like the one Rui says she experienced.