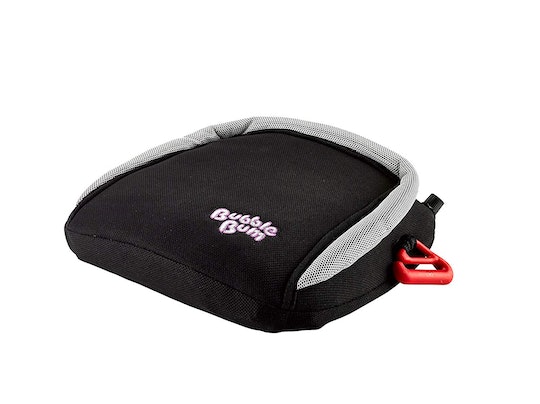 OK, Now There's An Inflatable *Booster Seat* That Has The Safety Ratings You Need

For many families, the warmer weather sparks the beginning of travel season and family vacations. And with kids, there's so much to bring. Whether you're going on a road trip, traveling on an airplane, or renting a car at your destination, there is one thing that is just a complete pain in the A to lug around, and that is the booster seat. Not to worry though, this inflatable booster seat will make traveling with kids a breeze.

We all know it's super important for kids ages 4 to 11 to use a booster seat, but traveling with it can be a real drag. Booster seats are heavy and bulky, and trying to carry them while you're carrying a multitude of other things is a difficult task. Not to mention chasing after the kids while trying to keep track of all your stuff — this mom gig isn't easy.

Enter The BubbleBum, a life saving invention created by mompreneur Grainne Kelly with moms and kids in mind. The BubbleBum is an inflatable car seat that is conveniently portable that inflates in seconds and offers safety, comfort and convenience without compromise. So whether you're just traveling to the next town over or going on long overseas voyage, safety has never been so convenient.

Booster seats are important for kids to be placed properly within a vehicle. A badly placed seatbelt can result in serious injury even in a mild collision. So not bringing along your booster seat isn't really an option, but now throwing your kids booster seat in your suitcase or tote bag is and moms everywhere are rejoicing. Parents love the fact that its compact nature allows for three boosters across the back seat, while kids love the fun colors.

If you're concerned about safety, The BubbleBum has earned the Insurance Institute of Highway Safety, Best Bet Award, eight years in a row and offers the crucial "boost" provided by a true booster seat, which is important because it raises the child up so that their legs fall comfortably downwards towards the floor. Without this "boost," children may become uncomfortable and try to compensate by slouching in their seat or sit in unsafe positions, putting them at risk for serious injury. The BubbleBum has had to undergo all of the same crash-testing and materials testing as any other car booster seat, and meets and exceeds the requirements.

BubbleBum Inflatable Backless Booster Car Seat
Amazon
It's the world's first inflatable, portable, and safe booster car seat. Created for kids ages 4 to 11 (or 40 to 100 pounds), it's made with memory foam to create stability in case of a crash. It's also compact enough to fit three together in one car, and comes in four color options.

So how does it work? The BubbleBum isn't inflatable in the same way as a beach ball would be or other inflatable device. Instead, the BubbleBum seat is filled with memory foam technology, which provides structural integrity, and in the event of a crash, stabilizes the flow of air within the inflatable chamber.

The seats come in black, chevron pink, and three international designs: Stars and Stripes, Union Jack, and Irish Shamrocks. It is available on Amazon for $29.99 or in twin packs available for $59.98.