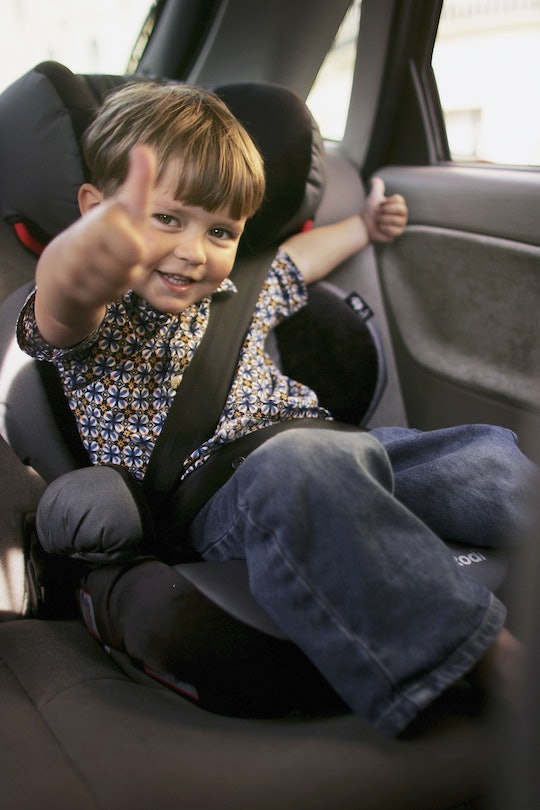 Car seats are the Rubik's Cube of parenting, in my humble opinion. I raised four sons and spent the majority of their childhood shuttling them from place to place, and I can guarantee you their car seats were never buckled properly. It makes me shudder to think what could have happened if we had ever been in an accident. Thankfully, the internet is a thing and there are people out there who want to solve the elusive riddle that forever escaped me. This car seat safety lesson from paramedics is an act of pure generosity, like they've already worked out four of the six sides of that Rubik's Cube for you.

Krystal Kleidon and her husband, both in Australia, have over 20 years of combined experience as paramedics, according to her popular Facebook parenting page, Project Hot Mess. And the two decided to dispel some myths about car seat safety, particularly as parents of 4-year-old son Alexander and a new baby on the way. Because, as Kleidon noted in her Facebook post:

People give their opinions on rear facing vs forward facing, side seat vs middle seat, chest clip height (FYI - Australia doesn’t use chest clips), straps, wearing jumpers… if there’s something to have an opinion on, it has been discussed before.

As paramedics, both Kleidon and her husband have seen many car accidents and noticed a reassuring trend,

Between my husband and I, in our 20 years experience, we have NOT seen a single child harmed in a car accident where the child was restrained in their seat properly. Not a single one.

We’ve seen car seats ejected from vehicles, we’ve seen cars that have rolled over so many times you can barely tell which way is up, we’ve seen accidents where you would be certain there would be no survivors.

And yet properly secured children in their car seats were never injured. Which points to the very real importance of proper car seat safety. Kleidon noted that the difference between a "$600 one and a $200 one" were unimportant, so long as the child was safely secured.

And so, she and her husband performed a simple test. They strapped their 4-year-old son in his car seat... and held him upside down. Because it's all about those straps.

How tight are you making the straps on your child’s seat? Can they pull their own arms out of them? Can you only fit one or two fingers underneath them? Do they have a big puffy jacket on that stops them from being strapped in properly?

Essentially, she suggests that any time you strap your child in the car, ask yourself if you would feel safe hanging them upside down. And let that be your guide, rather than price.

Kleidon's post has gone viral. It's been shared over 31,000 times and Facebook users were effusive in their gratitude for a little simple guidance.

User Cate Brickell wrote: I love this message so much! I've never been able to afford the $600 seats, or a new seat for each new baby (our current seat was given to us as a replacement on an 8yo seat), but if you don't strap them in, it doesn't work! I go so far as to adjust the straps depending if she's wearing a jumper.

While User Chloe Graham added: I really do not want to be judged here, but I want to say thank you for this post. I honestly think I'm not tightening my children's seat straps tight enough, the thought of them being tossed out and not actually protected is terrifying. I am going to check the straps and ensure that they can't get their arms loose. Should you only be able to fit one or two fingers underneath them?

Kleidon and her husband should absolutely be patting themselves on the backs for doing one heck of a good deed for parents. If only they had been around when I was buckling my kids into their car seats haphazardly. What a help it would have been.

More Like This
Take An Exclusive Look At A New 'Daniel Tiger’s Neighborhood' Episode About Pool Safety
This Free Website Connects Parents Who Need Formula With Those Who Have It
Dwyane Wade Shares Beautiful Advice For Parents Raising Transgender Children
Parents Will Demand $675,000 From Son & Daughter-In-Law If They Don't Have A Kid Soon