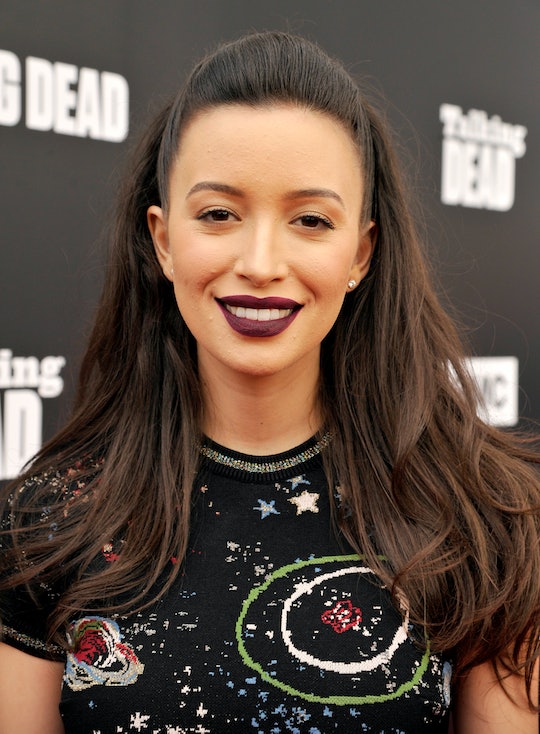 Celeb Mom Has A Strong Message For Breastfeeding Haters

It's almost impossible to believe that there are still people who get uncomfortable with breastfeeding. Still. And yet, the trolls are out there waiting to get offended, because that will make their day so much more bearable, I suppose. Fortunately, not too many moms have any time for the trolls these days, nor their Victorian-era sensibilities of decorum. For those wondering how to deal with said trolls, look only to this celeb mom's strong message about her breastfeeding selfie.

Christian Serratos stars as the formidable Rosita on AMC's popular zombie extravaganza, The Walking Dead, which tells me she's probably no shy, retiring wallflower ready to wilt under criticism. Right again, my friends. Serratos, who recently gave birth to a baby daughter, took to Instagram to share a few breastfeeding selfies with her followers. Which makes sense, because moms who breastfeed tend to do little else during the first blush of parenting. Because babies are hungry basically all the time.

In one particular post from Tuesday, Serratos decided to share a beautiful snapshot of herself breastfeeding her daughter while simultaneously showing off a new necklace; She captioned the photo,

Thank you for our custom D.C.W necklaces that represent us and OUR DAUGHTER

Ho hum, no big deal right? Except yes.. yes it was. Comments on the photo filtered in quickly, many of which called her out for trying to show off her body and attempting to get attention by breastfeeding her baby (because that's a real reason to breastfeed, obviously).

So how does one respond to negative comments directed at the most natural feeding process known to humankind? Well, I will let Serratos speak for herself. Clearly undeterred by haters, she posted another breastfeeding selfie on Thursday with the mic drop caption:

This is my body and my page. So I will post what I want, when I want. Those who disapprove can suck my left tit. #workingmom #chill

There is only one thing better than Serratos telling trolls to "suck my left tit," and it's the, "I have no time for your bullsh*t" look on her face as she does her makeup while breastfeeding (as if she weren't cool enough... ).

Serratos might have her fair share of detractors over the whole breastfeeding "scandal," but she has more than her fair share of supporters as well. Her post on Instagram has already received over 200,000 likes, some of which might even be from people who have breastfed or who (gasp) may even have been breastfed themselves at one point in time.

Will the internet trolls realize the error of their ways and give breastfeeding moms a break? Probably not. But has Christian Serratos given those same moms a super badass comeback for critics? Oh absolutely.