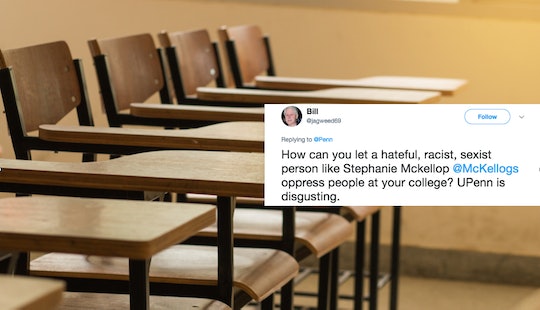 A teaching assistant from the University of Pennsylvania is under fire after she took to Twitter to share how she approaches classroom discussions. In order to ensure that all student populations are included, she employs what is apparently a controversial method. This college instructor always calls on black women first, and white guys are seriously pissed. Because of course they are.

Stephanie McKellop is a Ph.D. student and a TA for a history course titled, "Sinners, Sex and Slaves: Race and Sex In Early America," according to The Daily Pennsylvanian. On Monday, Oct. 16, she tweeted, "I will always call on my Black women students first. Other POC get second tier priority. WW come next. And, if I have to, white men." According to the publication, McKellop referred to her teaching method as progressive stacking. She linked to a Wikipedia entry, which describes it as "a technique used to give marginalized groups a greater chance to speak." Which makes perfect sense, since — oh, I don't know — the class is all about sex and race in early America.

In normal life, who has the easiest time speaking, most opportunities? Flip it. The classroom is the place YOU get to control social setting.

Cue: Angry army of "oppressed" white men, calling for her to be fired. "FIRE that racist, sexist fascist disgrace of a human, Stephanie McKellop IMMEDIATELY!" one particularly salty Twitter user wrote. "We won't sit by and watch." Another white dude chimed in with, "How can you let a hateful, racist, sexist person like Stephanie McKellop oppress people at your college? UPenn is disgusting."

"If a professor said, 'I am calling on white men first and then going down to white women,' I don't think the University would have had any problem suspending that professor, making a statement condemning it and talking about our diversity inclusion. The comment she made was discriminatory, and the University should take actions and fire her."

Romper has reached out to the University of Pennsylvania for comment, but had not heard back at the time of publication. In a statement to The Daily Pennsylvanian, Dean of the School of Arts and Sciences Steven J. Fluharty said UPenn is, "looking into the current matter involving a graduate student teaching assistant to ensure that our students were not subjected to discriminatory practices in the classroom and to ensure that all of our students feel heard and equally engaged."

According to the publication, he added:

McKellop tweeted that UPenn had asked her to not attend lecture and canceled her recitations for the week, according to Newsweek. Still, plenty of students, professors and strangers alike haven taken to social media to defend the TA's methods.

I'm at a total loss for words, here. In no way, shape or form did McKellop say she refuses to include white males in classroom discussions. So she calls on black women and people of color first — so what? Again, it's a class about sex and race in early America. You know, when African Americans were enslaved, beaten, raped and killed for no reason? And when women in general were oppressed and treated as second-class citizens? Yeah. The lasting effects of these harsh realities are still well and alive today, if you haven't noticed.

And sorry, not sorry, but I find it extremely difficult to take seriously any white dude who is offended by the idea of progressive stacking. So the groups of people whose opinions are most often overshadowed are finally get first-speaking priority. Big. Freaking. Deal. McKellop should be applauded for her efforts, not threatened with removal.