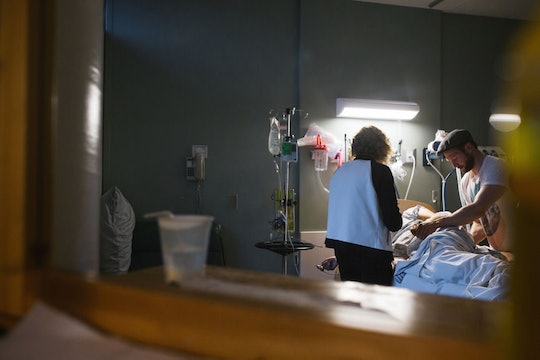 Here's How A Common Classroom Item Could Help Prevent C-Sections

As C-section rates increase around the world, healthcare professionals strive to find ways to make vaginal births an option for more mothers. A team of doctors in Boston believe they can use a common household item to decrease the frequency of cesarean sections: white boards. Their thinking is that the boards can help them optimize communication between birthing teams and laboring mothers, and they're already seeing strong results.

As NPR reported in October 2018, a study found that the frequency of C-sections had more than tripled since 1990 worldwide, with 21 percent of all births being cesareans. Many of these procedures are life-saving, but there's also been an increase in elective cesareans, which many find concerning because these procedures can increase the risks for both mom and baby, according to a study from 2018. (Though it should be noted that cesarean births in no way lessen the emotional connection a parent shares with their child.)

From a greater increase in possible complications from hysterectomies to an increased risk of developing postpartum depression, it's clear cesareans take a toll on the body, motivating doctors to find ways to decrease the number of annual C-section births. And as reported by The New York Times, the doctors of Beth Israel Deaconess Medical Center in Boston are using white boards to become more intentional in their communication.

Let me explain: The hospital hangs a large white board in every labor room, listing the name of the mother, every member of the birthing team, mom's birthing preferences, and whatever phase of labor she's in on the board. The white board also lists the time the whole birthing team will "huddle" to reevaluate where mom is in her labor process, making the mother herself an integral part of the decisions the team makes.

The solution seems preposterously simple, no? But ensuring an entire birthing team is talking to one another and to the mother herself when making decisions about her labor is a huge step forward. Birth can be extremely chaotic, and a lack of set times, places, and people with whom to communicate can make C-sections a more likely outcome. The whiteboard system gives birthing mothers back their autonomy, putting them in a better position to advocate for themselves and be heard.

There is so much women aren't told about cesareans even when they have them, like the specifics of the healing process for instance, so setting up labor to ensure the mother's wishes are the main priority in every conversation shifts the narrative in an important way. As one patient who gave birth at the hospital told The Times, "it was like: What do you want? To be asked that question, as a laboring mom, is powerful. It made me feel heard."

The white boards are part of a year long trial, so the hospital can't yet show the practice definitely decreases C-sections just yet. But their early data is promising, and the patients love the communication even if it doesn't directly decrease cesarians. Women who have C-sections should not be shamed for their choice and for doing what's right for their body and their baby, but it's refreshing and encouraging to see doctors putting in effort to make vaginal birth a realistic option for more mothers, especially with such a seemingly easy solution. Only time will tell if white boards really are the key.