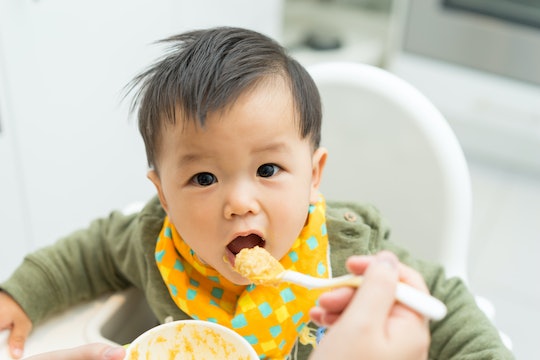 This Could Be The Reason Why Your Kid Is A Picky Eater, According To This New Study

It's no big secret that kids don't really like to eat their vegetables. All you have to do is sit at a table with a toddler for about 10 seconds into a meal where they're expected to eat their greens. The faces they tend to pull speak volumes. It seems there might be an actual, scientific reason that young kids are picky eaters, and it's probably not what you think. A new study found that there's not enough vegetable variety in toddler food, and this could be the reason kids don't develop a taste for anything that could be more bitter from the time they're little.

A new study published in the American Journal of Clinicial Nutrition was conducted to determine the types and prevalence of vegetables used in baby and toddler food. Researchers from the University of Colorado School of Medicine put together a comprehensive list of 548 baby and toddler foods sold from 20 American companies, looking specifically for prepared single-vegetable baby foods.

What did they find? There's not nearly enough variety of vegetables in these early foods, and the main vegetables being used tend to have a sweeter taste. Things like carrot and sweet potato were the most often used, according to the study's findings, while there were simply no foods that used leafy, dark green vegetables as a primary source.

In fact, baby foods made out of just a single vegetable made up for a very small percentage of the products available on the market today; 52 out of 548, according to Medical Xpress. None of which were made out of green vegetables like beans or spinach.

These sort of early introductions to sweeter foods can make a difference to a child's diet later in life as study lead author Kameron J. Moding, PhD, postdoctoral fellow in the Department of Pediatrics told Medical Xpress:

The commercial infant and toddler foods market in the U.S. does not appear to provide caregivers with an adequate type and selection of products to facilitate children's later acceptance of the kinds of vegetables they will encounter and be encouraged to consume once they have transitioned to table foods.

Moding and the other study research partners also noted that children need to adapt to the typically bitter flavors of nutrition-packed dark green vegetables through repeated exposure, while sweet foods are immediately easier to eat for little ones.

A similar study conducted by the University of Glasgow in 2015 looked at 328 baby foods throughout the United Kingdom and found the same thing; a much higher frequency of fruits and sweeter vegetables rather than dark greens like spinach. Lead researcher Dr. Ada Garcia explained to The Guardian at the time:

Infants have an innate preference for sweet foods. While manufacturers clearly recognize the demand for products that appear to be healthy, commercial pressure will ensure these products are highly palatable. Taste learning requires parents to introduce their children to less palatable bitter tastes and keep offering them.

While feeding children mostly sweeter foods from a young age is a problem, especially because it could cause a predisposition for sugary foods down the road, Garcio noted to The Guardian, "However, it is probably unrealistic to expect commercial products to assist in this process."

So what's a parent to do if they want to ensure their baby is starting out with green vegetables rather than sweeter ones (or even if they just want a variety)? It might be a good idea to make your own vegetable purees, especially if you follow this handy guide to introducing food to your little one from Parents.

With any luck, some of the baby food manufacturers will start to consider selling foods that help parents introduce the less palatable vegetables right out of the gate, instead of making it harder for them as their kids get older.

More Like This
What Is RSV?
The Best Halloween Family Pajamas To Match Your Boos
Can Elderberry Help Prevent Illness In Kids? Doctors Weigh In
Tips For Apple Picking With Kids