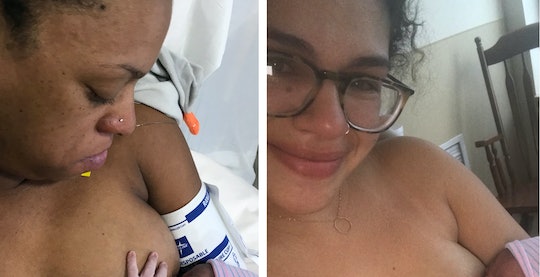 This Couple Co-Breastfed Their Child — Here's How They Did It

Co-breastfeeding, where both parents nurse the child, is relatively unheard. The process to achieve this, induced lactation, is often touted in some mothering communities as a mysterious act that a friend-of-a-friend tried, once, maybe. Most parents who cannot naturally nurse their child turn to bottle feeding or supplemental nursing systems for nutrition. Many use donated breast milk, and just as many utilize formula. Yet for some parents with a desire to nurse their child — adoptive parents, parents whose baby arrives via surrogacy, and same-sex parents — there is a real need for solid information about induced lactation. One couple, Tiffany and Glenis Decuir, set out to share information about their successful co-breastfeeding journey with their son Orion. This is Glenis’ story, as told to Meg St-Esprit.

When we found out that my wife was expecting last Christmas Day, I was over the moon with excitement to share this experience with her. I was also a bit apprehensive- having birthed and nursed my two older children (Savannah, 13, and Nicholas 10), I know about the bond and connection that happens during pregnancy and nursing. I know how deep it is and that it starts from the first moment you find out you are pregnant. I was having a difficult time envisioning how I would find my place connecting emotionally with our baby.

As I wrestled with these thoughts, it was actually my wife Tiffany that found information on inducing lactation. She was researching supplemental nutrition systems, a system of tubing used on the breast to simulate nursing, when she stumbled across information on induced lactation. We don’t have any friends who have ever done it, and truly did not have any idea that it even existed. Once we found out it was possible, though, we decided to give it a try. I was cautiously optimistic that this would be the solution to my fears about connection and bonding with our newest child.

Digging into the information out there, we decided on the Newman Goldfarb protocol.* Essentially, the protocol is about combining timing with the right hormones, and withdrawing them at the best time to trick the body into believing that it is pregnant. The earlier before birth that one starts the process, the more successful it tends to be. I started inducing lactation in February 2018. I used hormonal birth control, but skipped the placebo pills each month. As the baby’s birth approaches, you drop the birth control and start pumping like crazy. I started pumping 9 weeks before our due date.

At first, I struggled to find a medical practitioner who would support our desire to induce lactation. My GP looked at me like I was insane, and told me to go see my gynecologist. My gynecologist looked at me with the same skepticism in her eyes and told me that she could not prescribe contraceptive for that purpose. I just switched to a different gyne and didn’t tell them why I needed the contraception.

Every time Orion ate, we both nursed him each session. Always my wife first, and then me.

We also found a lactation consultant who, while she had never worked with anyone inducing lactation, was willing to take this wild ride with us. I also took domperidone,* which is a medicine usually used to treat stomach conditions. While I had taken birth control before and knew to expect the usual side effects, I had to also deal with the effects of this medication — namely a 30-pound weight gain. The positive side effect of the domperidone is that it increases prolactin levels, and I continued taking it even after the baby was born in August.

We developed a birth plan to include us both in the process, though we didn’t actually share this with anyone who was present in the delivery room until it happened. We wanted Orion to latch [onto] my wife Tiffany first, so that she could establish her supply for Orion, and then latch him onto me.

At the time Orion was born, I already had over 600 ounces saved in the freezer, so our priority was to establish Tiffany’s supply. Everyone in the delivery room was so very supportive. They had a lot of questions and were very intrigued. The medical professionals had not ever encountered a situation like ours before. After an hour of skin-to-skin and nursing with Tiffany, he came to me for the second hour. For the next three weeks, every time Orion ate, we both nursed him each session. Always my wife first, and then me. After the first three weeks we were able to alternate feedings and both keep up our supply.

Now that we are both back to work — I took eight weeks off and she took 12 — we are both pumping.

Everyone in our life has been so very supportive. It has been absolutely amazing. We achieved our goal of both of us feeling connected and bonded to Orion, and became closer through this process as well. Tiffany actually told me that if I had not induced lactation, it would have been much more stressful for her. She loves how he looks up at me when he is feeding, and believes that I have every right that she does, as his mother, to feed him this way. It’s been really empowering for both of us. It allows her to have a break, it allowed us to go to the park when he was 6 weeks old and leave a bottle of my milk for the babysitter. Tiffany has nothing but positive feelings about the whole experience, and doesn’t feel that in any way it hampered or affected her bonding experience with Orion. So many women worry about their supply or if the baby is getting enough, but we don’t ever have to worry about that.

Now that we are both back to work — I took eight weeks off and she took 12 — we are both pumping. I put a lot of my energy and love into this process, and for it to actually be successful, when we went in not knowing the outcome, is just so amazing to me.

Because I received negative pushback from doctors and I really had nowhere to find support, I decided to open up my journey and document it on Instagram. I’ve been honest from day one with all the moms who follow my journey. I’ve been very open about having IGT (insufficient glandular tissue). Women with this condition usually cannot make enough milk for their child since not enough breast tissue to hold milk. No one ever talks about IGT, and since been open about my process and the tough times I believe that I’ve helped a lot of women in their journeys to induce lactation or nurse in general.

Looking back a year ago to when I did not even know this process was possible, it is truly remarkable to see how far we have come and what we have accomplished as a family.

*Domperidone is not approved for legal sale in the U.S. by the FDA, due to concerns about the health risks it poses to lactating women. This piece is not intended as medical advice; you should discuss any medications with your physician.

More Like This
6 Bizarre Superstitions About Christmas Babies
Baby Growth Spurts: When They Happen & What To Expect
When To Stop Swaddling Your Baby: 8 Signs It’s Time To Transition
41 Strong & Sweet Baby Boy Names That Start With “K”