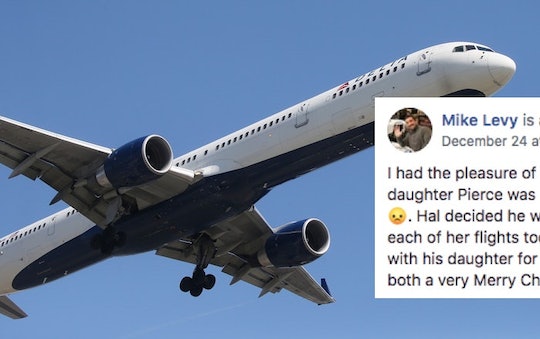 When your kids become adults and find their own way in the world, it gets tougher all the time to shoehorn yourself into their lives. You have to get creative and get flexible if you want to spend time with your kids... and no one knows this better than a father named Hal Vaughan. Because this dad booked six flights on Christmas Day just to see his daughter, and if you're not crying already I'm really sorry about your cold, dead heart.

Hal Vaughan from Ohio had to go to probably the greatest lengths I've ever heard of to spend Christmas with his daughter, Pierce Vaughan, who's a flight attendant. It seems Pierce was working for Delta Airlines for the holidays, according to People, which normally would have meant she couldn't spend time with her family.

While this would have arguably been a pretty sad situation, such is the reality of working at certain jobs. And Hal Vaughan clearly understood, because instead of asking her to book time off (which is exactly what I would have done because I'm a selfish person) he decided to join her at work — by purchasing a total of six flights through Christmas Eve and Christmas Day, just to be with his daughter.

Fellow passenger Mike Levy from Toledo, Ohio shared Hal and Pierce Vaughan's story on Facebook on Monday. "I had the pleasure of sitting next to Hal on my flight back home. His daughter Pierce was our flight attendant who had to work over Christmas. Hal decided he would spend the holiday with her."

Levy's post continued, "So, he is flying on each of her flights today and tomorrow around the country to spend time with his daughter for Christmas. What a fantastic father! Wish you both a very Merry Christmas!"

Not surprisingly, Vaughan's story of fatherly love has gone viral. Levy's post has been shared 31,000 times, and the comments have been overwhelmingly positive; rather an anomaly for the internet.

"Oh wow It makes me cry (happy). What a beautiful daddy’s love," one commented.

Another wrote, "So cool! What a great dad."

As Levy explained in an interview with CBS News, Hal Vaughan purchased Delta Airline tickets for six flights around the country, including the flight from Fort Myers, Florida to Detroit, Michigan where the men were seated beside each other. In first class, no less, which Pierce Vaughan noted in her own Facebook post about her dad's adventure was something of a "Christmas miracle."

"Dad’s first trip using his benefits was a success! A special thanks to all of the patient, wonderful gate agents around the country and my perfect crew," she wrote on Facebook. "He made it on every flight and even got first class RSW-DTW (Christmas miracle). Shoutout to Mike Levy for being a great first class passenger & helping us to understand how cool this actually is!"

Hal Vaughan's decision to spend the holidays in the air watching his flight attendant daughter work might seem extreme to some, but there are plenty of parents out there who get it. Who know the idea of your kid being alone for the holidays is too much to bear, and there's nothing you wouldn't do to be there for them.