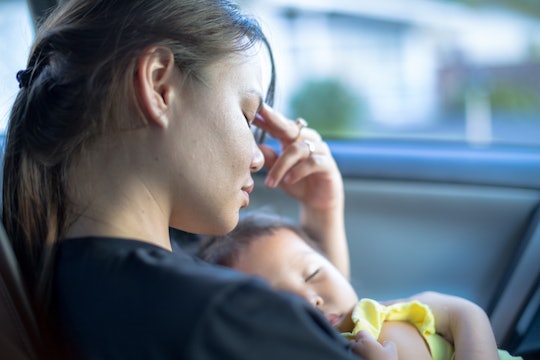 I don't know how I like my pizza. As a mom of four, this is probably the truest thing about me. Because when we order pizza I always try to get toppings that work for everyone, and pizza is uniformly delicious so it doesn't concern me. Until I try to remember what I used to like on my pizza before kids. And I can't remember. I have other roles in my life, but it is my role as a mom that informs every decision. It is my main identity. So I totally get why this dad is going viral for saying the things moms aren't allowed to feel. That an integral part of me "died" when I became a mom. And I think maybe I miss that girl from before.

The Facebook page for Humans of New York, where people are interviewed about their lives on the street, recently shared a quote from a dad who was taking a two-day trip to the city. As he explained in the post, "My wife urged me to take this little trip to New York so that I can clear my head. It’s just for two days. But my leash has been so short lately that it feels like an eternity."

Now before you get triggered by the word "leash," read on for some beautiful insight.

As the stay-at-home dad went on to explain:

Part of me definitely died when our daughter was born. I was always a free spirited person. I traveled a lot. I never had a boss. I had all the choices in the world. But a lot of that disappeared in order to make things possible for my daughter. I watch her during the day. And I’m not mad about it. This is the happiest time of my life. It would be great if my daughter was here right now. It’d be so fun to watch her run around the park. But I’d also be worried about her safety. And the diaper bag. And the car seat. And the stroller. And our next meal. And our next place to stay.

This is the reality of parenting, and it's something I think most parents don't think we're allowed to resent for even a moment. The loss of identity, the idea that your days are always caught up with someone else's needs. Of course you love your kid... but does that mean you have to stop loving yourself? As this dad continued, sometimes a parent simply needs to reconnect with the person they were before:

I just need a little space to be me. Because it can be so easy to get lost in helping a new person become someone.

This post clearly brought up a lot of feelings for people. It's been liked 183,000 times and shared more than 12,000 times. And the comment section is full of all kinds of opinions.

Some people were incredibly focused on the (frankly presumptuous) idea that this father was being selfish towards his wife and child.

wondering who lets his wife off the leash, to be herself, to find her personal space and clear her head... I hope she won't burn out there...

I hope your wife receives the same in return.

I hope he returns the favor when his wife is feeling overwhelmed by motherhood.

Others were fixated on the dad's assertion that a part of him died when his baby was born. Because again, parents are expected to welcome their total loss of autonomy with nothing but open arms, it seems.

A part of you died when she was born? Yes, the childish, self-centered part. The part that you cherished. Being 'worried' about her safety etc., is nothing more than putting another human being higher than yourself.

Thankfully, there were parents out there who understood the struggle and applauded this dad's honesty... and admitted certain parts of them died when they had kids too.

A part of me died when my son was born, and not just the selfish part. The part who had time to read four books at one time, the part that rode horses, the part that had time to daydream... It was a fair trade, but that doesn't mean I dont miss that part of my old self.

Part of me died when I had children too! And I have two! But, a new part was born. A hardworking, you-bet-your-ass part. I don't regret having children, neither does he, he's allowed his honesty.

It is often forgotten that a parent is also born, not just a baby. 💕

Such an amazing perspective: "it can be so easy to get lost in helping a new person become someone." I love that your wife understands and encourages you to reset ❤I think everyone needs support like that in their life.

Here's the thing; aren't we supposed to be raising children with unique spirits and individuality? Don't we want them to go out into this world knowing exactly who they are, what they want, and how to get it?

Or do we want all of that to end for them once they become parents as well? Because, as this dad so clearly pointed out, that's what we could be teaching our kids by example. So go to the beach, go for a drive, read a book, have coffee with friends. Figure out what you want on your pizza.