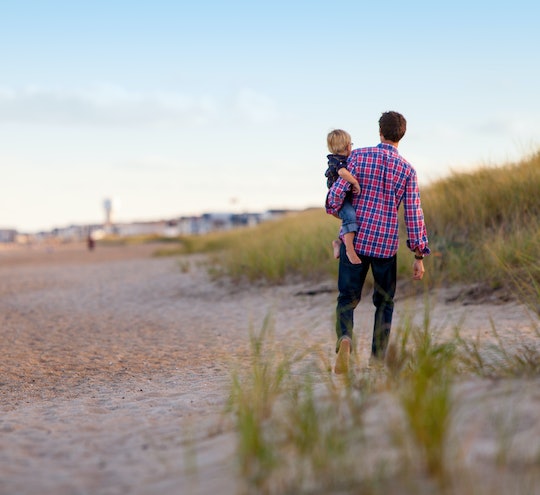 This Dad Of Four Tweets His Funny Conversations With His Kids, & They Are Incredible

One thing most people learn pretty quickly after becoming parents is that a sense of humor is key to not losing your entire mind — and that only becomes more apparent with each subsequent child added to your brood. Parenting is chaotic, messy, hilarious business, and honestly, there are plenty of days I feel like if I don't laugh at myself, I'll probably cry. But at least I'm not the only one: this dad of four tweets his conversations with his kids, and even though his posts are spot-on funny, they're also incredibly relatable. In an interview with Us Weekly, Indiana-based web comic James Breakwell explained Tuesday that four years of tweeting about the conversations he's had with his daughters (who range in age from 5 to five months) helps him deal with the craziness of fatherhood. And, judging by his 397,000 Twitter followers, his particular brand of humor mixed with brutal honesty is something that a lot of parents seem to appreciate.

Dealing with a horrific diaper blowout isn’t so bad if I can turn it into a tweet that makes strangers on the Internet validate my existence.

But diaper blowouts aren't the only thing Breakwell and his girls discuss. Post topics have included everything from puberty, to Star Wars, and even dad's cooking skills.

How do Breakwell's kids feel about being Twitter-famous thanks to their dad's tweets? He told BuzzFeed, "they like what I do on Twitter mainly because it’s all about them." His wife on the other hand? She's not quite as enthusiastic about her husband's oversharing.

But the good news is, Breakwell's posts about marriage are just as funny and accurate as his posts about fatherhood:

But perhaps the realest of all the Tweets? This painfully accurate description of pretty much every parent's feelings on a regular basis:

In other words, if anyone ever wants to know what being a parent is like, this Twitter account will basically tell them everything they need to know.