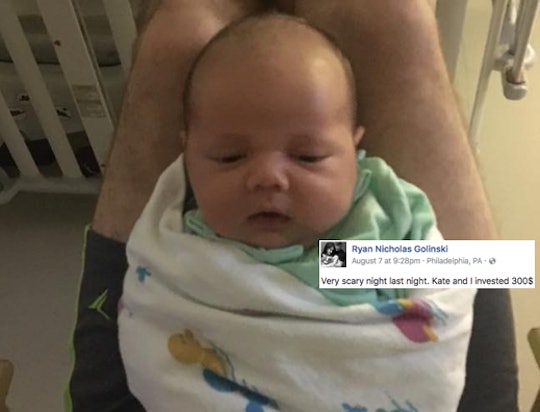 Sleep is a major source of stress for new parents. Wondering how to get a baby to actually nod off, figuring out where the baby will sleep, and worrying about the infant's health throughout the night is stressful. Luckily there are tools out there to help, like the Owlet Smart Sock, which saved a newborn's life, according to one new dad. According to a viral Facebook post, new parents Ryan Golin and Kate Crawford threw down $300 for the wearable monitor last month for their son.

That's expensive, but it's a device that's supposed to prevent sudden infant death syndrome (SIDS) by monitoring a baby's vital signs, and for a little piece of mind, $300 is worth it. According to Owlet, the device isn't meant to diagnose or prevent any disease and just offer parents some"piece of mind," but it does alert parents is something is up with their infant.

The Owlet is a little fabric sock that has a pulse oximeter in it with Bluetooth capabilities. The pulse ox, which is a device commonly used in emergency rooms or in hospitals that clips onto an adult patient's finger, monitors the heart rate, body temp, and oxygen levels all night. The data is then sent to your phone, so you can be alerted with the levels go up or drop outside of normal levels.

Golin posted on Facebook that he and Crawford were woken up by the alert system on the Owlet the other night. They rushed to go see what was going on with their son.

Golin wrote that the monitor said his baby's heart rate was 286, which is very high for such a tiny person. They reset the device three times and then finally headed to the hospital. Golin wrote:

We have spent the last 24+ hours at the hospital for something called SVT, and we caught it before any side effects. So everything is going well now and his heart is still extremely healthy, if we didn't catch it as early as we did with that sock, his heart wouldn't have been able to handle it and we could be dealing with something a lot more serious. I highly recommend new parents invest into this sock, its well worth the money.

Do you need us to pass the tissues yet? Because that was a very good save and a super happy ending to what could have been pretty dangerous. Golin's son has supraventricular tachycardia (SVT), which is a condition where a person's heart beats abnormally, and luckily, it's treatable.

Because of the arrhythmia, the heart beats super fast, which could just be a "nuisance," as John Hopkins Medicine explains on its site, or it could cause the heart to beat in a way that blocks adequate blood flow to the body. So this monitor, which is supposed to just give parents some piece of mind, caught a heart condition that now can be monitored and treated.

Of course, being able to afford a $300 device is a luxury that not every parent can afford. But, there are other options: Owlet offers refurbished ones for $149 (though there is a limited supply) and financing options, so you can pay $50 a month for a new one, or $25 a month for a refurbished one, with no interest for six months.

Then again, some experts claim that the data Owlet or other baby breathing monitors sold as consumer goods (and not medical devices) transmit to parents aren't always 100 percent exact and may not prevent SIDS at all. Whether to make the investment or not is up to every parent to decide for themselves — for the Golins, it was literally a lifesaver.