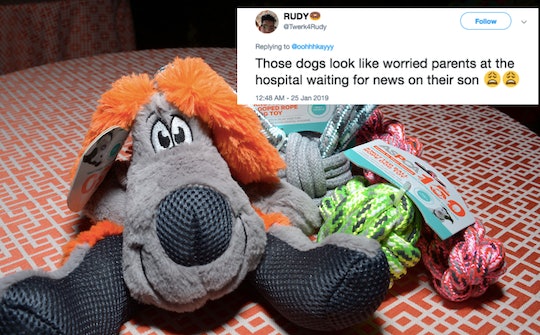 Life gets really difficult and confusing when your kids move out of the house. After so many years of revolving all of the hours of all of your days around them, what are you supposed to do next? Expend all of that energy on your dog, obviously. Like this dad who went above and beyond to save his dog's toy. I'm sure there are some people who might consider his behavior a little extreme, but he's going viral on Twitter so what do those people know about it? Nothing, that's what.

Twitter user Michaella Wallace shared a pretty adorable tweet about her dad Terry on Thursday. It seems he was checking in with her about the status of their family dog's favorite toy that was left outside and looked as though it might be destroyed. Instead of simply shrugging and grabbing a different toy for his dog, he decided to take action apparently. He contacted his daughter and stayed in touch for a little play-by-play on how he planned to revive his dog's toy. Here's my favorite thing about the exchange you're about to see; the daughter starts off sort of humoring him and then when things escalate she's a little shocked. But, like, supportive shocked of course.

Terry texted Michaella, who is away at college in Pennsylvania, that their dog Lucky's stuffed toy had an accident on the road outside and it might have "passed." Then he managed to find a "slight pulse" and decided to do some CPR. I guess Terry is pretty solid in the CPR department because, as he texted his daughter,

While his daughter appeared a little concerned about the apparatus he created that looked an awful lot like an IV drip (and his wife, who is part of the family group text, simply said "omg" and presumably went back to living her life), the two dogs appeared incredibly relieved. And Twitter really can't handle any of it at all.

This tweet was liked more than 541,000 times, and it seems it ignited a little fire in dog lovers everywhere. Some of whom went to equal lengths to make sure their pets could keep their own babies close.

Now I don't went to get all psychological here, but I strongly suspect Terry's little impromptu surgery was for more than just the dog. And it turns out I'm not wrong. Michaella told The Dodo that her dad might have had a very sweet ulterior motive:

With the first week of classes started my dad wanted to send me a little something for a pick-me-up.

Although it was definitely about Lucky and his sister Laci as well:

Lucky and Laci love my dad and he is the same way towards them. Our dogs mean so much to our whole family and everyone who meets them adores them.

This is just one of those classic stories about a man and his dog and his dog's stuffed toy and his pretend surgery and his daughter.

And honstly, it never gets old.