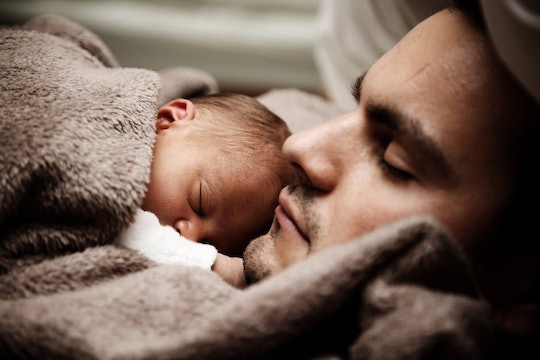 This Dad's Graph Of His Newborn's Routine Is Oddly Comforting

At this point, new parenthood is basically synonymous with sleep deprivation. Babies snooze and snooze and snooze, and, at night, they wake up because they're hungry or teething or missing mom and dad. And then they, of course, cry and cry and cry some more. While this craziness is to be expected, it can all feel pretty unpredictable. But, in an effort to crack this newborn code, one husband-wife power couple recently set out to collect the data that would help them anticipate their new daughter's next move. The result? This dad's graph about his newborn's routine. Aside from perfectly capturing the chaos that is new parenthood, it also offers concrete hope that the whole situation mellows out — eventually.

On Reddit earlier this month, user jitney86 unveiled a graph representing more than a year's worth of data that he and his wife collected on their daughter's routine. The most obvious finding — that babies tend to do a lot of sleeping and a lot of breastfeeding — likely won't surprise anyone who's ever spent much time with a baby. But the way that the accounting of the baby's time (accounted for in 15-minute increments from the time she was 3 months old to 17 months old) begins take the shape of a logical pattern over time is much more unexpected.

It may be the beacon of light at the end of the tunnel that all exhausted, bleary-eyed new parents need to see when their babies start bawling at 3 a.m. It certainly did wonders for jitney86 and his wife, as he wrote in the Reddit post:

My wife started collecting data after 3 months because we were going crazy due to the lack of predictability that comes with having a newborn. We found it helpful and just kept going.

The couple recorded the details of their daughter's routine in an Excel spreadsheet, which they even set up to open on both of their phones and sync. And, honestly, the way that blue and green lines demarcating time spent sleeping and breastfeeding eventually emerge to form a discernible — even predictable! — pattern is kind of beautiful.

For one commenter, the graph confirmed his belief that taking care of a newborn is a project that only improves with time. User C_Fall wrote in part:

I have a 4 month old as well as a two year old. Don't let anyone tell [you] it doesn't get easier. The new born [sic] phase SUCKS. Don't get me wrong, I love my little 4 month old but there's a reason that nature makes babies so darn cute, cause if they weren't... we'll [sic] let's just say the human race wouldn't have made it this far. I mean, you know it gets easier when people are having 1, 2, even 3 additional kids, WILLINGLY!

It's a great sentiment for moms to remember when breastfeeding eight to 12 times in a 24-hour period begins to feel like a full-time job or when the little one wakes up over and over again in the night.

Babies are generally ready for a sleep schedule by the time they're 5 months old, and working on getting them on a routine can be incredibly beneficial for both babies and their parents. According to BabyCenter, adhering to a routine can translate into happiness for the babies, making it easier for them to transition into the care of a sitter when the time comes.

However, parents should always pay attention to their babies' cues and put meeting their needs over following the schedule, as associate professor of pediatrics at the University of Texas Health Center at Tyler Kathryn Akin told the site:

Even though your baby may have eaten one or two hours ago, if she's crying as though she's hungry, you should follow that direction. If your schedule indicates that it's time for your baby to sleep, but she's fussier than normal and needs comforting before going down, then she should be comforted. No schedule should supersede the needs of your baby.

There's no doubt that new parenthood is a bit easier when you know that there is some rhyme and reason to your baby's habits. And, of course, when your new little one might need certain things. But then again, babies will be babies and there's no graph that'll fully prepare you for what's ahead.