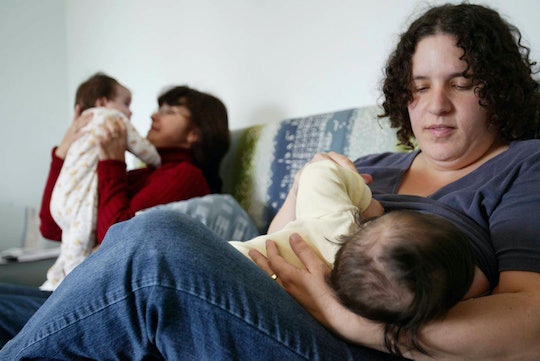 With all the talk about urging women to "lean in" and do it all, from flourishing in their careers to taking care of families, it's easy to forget that focusing on just one of those can be a herculean task all by itself. For example, any mom who's opted to go the "breast is best" route knows that breastfeeding can be like a full-time job all on its own. Seriously, moms dedicate a mind-boggling amount of hours to the task of nourishing their babies. And that's true even if they don't decide to breastfeed, but even more significant if they do.

First, the American Academy of Pediatrics recommends that moms breastfeed their babies exclusively for about their first six months of life. And that means being ready for a feeding whenever the baby is hungry. Especially right after birth, that's often. During the first month, for example, babies are expected to feed between eight and 12 times in a 24-hour period, according to KidsHealth. Younger newborns spend as long as 20 minutes feeding on each breast, for a total of about 40 minutes per feeding session. That means that mothers of babies this age could spend anywhere from about 5.3 to a full eight hours with their baby at the breast.

As babies grow, so do their stomachs. That means that they can eat more at once and won't have to eat as often. Still, a baby who is 1 to 2 months old generally nurses between seven and nine times a day. Assuming that these younger infants are still spending about 20 minutes on each breast, that means moms will breastfeed for between 4.6 and six hours each day during that period.

Whew! All that breastfeeding, of course, does not take into account all the other tasks that go along with taking care of a newborn, like feeding, bathing, and bonding. And for some moms, that's coupled with taking care of older kids, too. And that's assuming that she's either a stay-at-home mom or able to take maternity leave from work, even if it's usually unpaid.

Of course, moms do have the option to pump their milk in advance. This can be a great way to squeeze in a rest once in a while, as it allows someone else, such as a partner, to take over feeding from time to time. Pumping could also be a necessity, as some larger companies are legally mandated to allow employees time and space to pump breast milk while on the job under the Affordable Care Act.

If breastfeeding itself may seem like a full-time job in the beginning, it may not feel that way so much as a baby gets older. For one, moms and babies will fall into a more regular and predictable schedule with time. Also, babies who are 3 months old and older may breastfeed only between five and eight times a day. And older infants spend less time doing so: About five to 10 minutes on each breast instead of 20, according to KidsHealth. So, moms of babies who are this age could spend anywhere from less than an hour each day breastfeeding to two hours and 40 minutes.

Babies also experience growth spurts at 3 months and 6 months, at which times they'll eat more often. At that point, moms deserve a promotion at this job.