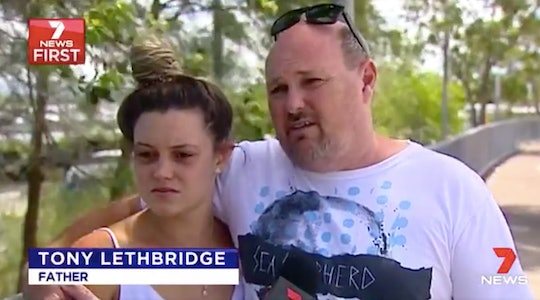 There's this thing we have as parents that isn't always taken especially seriously: our intuition. It's difficult to describe, nearly impossible to prove, and yet real nonetheless. Because our kids are the people we know, all the way deep down into our bones. Ensuring their safety and well-being is a necessity as important to us as breathing. Knowing they're OK is how we get through the day. So when this dad's gut instinct saved his son's life, to me that was proof that a parent's intuition is truly a real thing. A sixth sense, and should be respected as such.

Australian father Tony Lethbridge was concerned when his 17-year-old son Samuel didn't come home after a night out with friends, as Scary Mommy reported. Seriously concerned, especially since staying out all night wasn't something in keeping with Samuel's personality. When Lethbridge contacted the local police in New South Wales, he was told to assume that his son had probably run away from home, according to The Orange County Register. But, again, knowing his own child considerably better than the police, he was not convinced. He told the Associated Press:

When I saw the police, they thought he’d run away. I said that’s not Samuel. When he doesn’t show up or phone, something’s seriously wrong.

He couldn't have been more right; something was seriously wrong.

After waiting in vain for his son to return home, Lethbridge decided to take matters in his own hands; he hired a helicopter for around $1,000 to go up in the air to look for his missing son, according to CBS News. This is unusual, since CBS News reported that people rarely pay for their own search and rescue, and Lethbridge works in a mail sorting room. But something was telling him that his son had been in a car crash and desperately needed help. Lethbridge remembered a case of another person who died after being in a car crash recently and not found for days, and was determined this would not happen to his son, AP reported.

"I understand that they’ve got a lot to do and they hear this every day, but I took matters into my own hands and was thinking all night that tomorrow morning, I’m just going to get a helicopter and go looking for him because we’re running out of time — it’s been long enough," he told AP.

It's a good thing Lethbridge decided to trust his gut, rather than the (admittedly probably well-intentioned) advice from those around him. The helicopter was only in the air for 10 minutes before Samuel's crashed car was spotted less than 20 miles from the family's home.

"It was fairly easy to spot from the air," Lee Mitchell, the helicopter pilot hired by Lethbridge, told CBS News. "It would've been near impossible to see from the road because it was well below the road level."

A family member had traveled with the pilot, and was the first to reach Samuel. Michael Lethbridge, Samuel's uncle, told CBS News:

I really didn't want to go. I was scared of what I'd find. As I got closer I seen Sam's head move. I went from being terrified to ecstatic in a couple of seconds.

Samuel is reportedly currently in serious condition at the hospital, according to AP, having suffered multiple fractures in the accident. But it could have been so, so much worse. If his father hadn't made a conscious choice to listen to his gut instinct, to trust his intuition as a parent, his injured son might never have been found.

It's a powerful lessons to parents out there, who might sometimes doubt the strength of their own intuition when it comes to their children. Sometimes, the best thing you can do is go with your gut. Even if nobody else believes you. Because, at the end of the day, that's your kid. And you've got to do what's right for them, even if it seems ridiculous to everyone else.