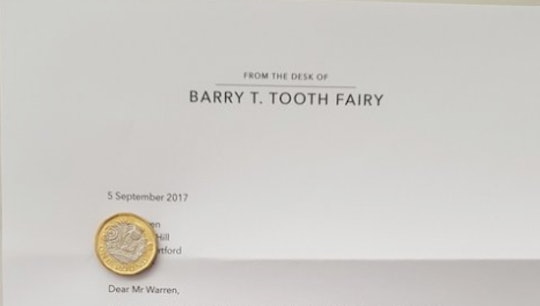 Look, I don't really think anyone enjoys going to the dentist. Even if it's just for a cleaning, having someone poke and prod around in your mouth is not comfortable. But, the thing is, going to the dentist is kind of a necessary evil. Oral hygiene is super important, and teaching your kids that life lesson is crucial as well. However, most kids don't really like having to brush and floss their teeth twice a day, which is understandable. But, when kids don't take care of their teeth, they make way for disease and cavities. And this dad's letter from the Tooth Fairy to his son proves that there is a way to show your kids how important taking care of their teeth is, but you might just have to think a little outside the box.

Father of three and London native, Henry Warren, decided to have a little fun when his son, 8-year-old Sam, who lost a tooth that was in a sad state. Along with a £1 coin (about $1.32) for the tooth, Warren decided to also leave a letter for Sam from the Tooth Fairy under his pillow.

Signed from "Barry T. Tooth Fairy," the letter advised young Sam that if he didn't start taking better care of his teeth, the tooth fairy might not be as obliged to pay him a visit next time he lost a tooth.

Read the adorably brilliant letter below:

Warning young Sam that his tooth was found to be in abysmal condition, the Tooth Fairy then went on to say that the "tooth had to be referred up to the committee for further analysis." After discovering "trace amounts of Fanta and residual amounts of both cereal and chocolate," the Tooth Fairy concluded that Sam was not brushing his teeth properly.

So, what's a tooth fairy to do? "Withhold payment," of course. Well, not all payments. But the Tooth Fairy did warn little Sam that if the next tooth under his pillow wasn't a lot cleaner, he would be getting no money at all.

Warren's response was so clever, that Twitter users were praising his creative tactics.

When The Today Show reached out to Warren for comment, they were referred back to Barry T. Tooth Fairy, who tried to explain his predicament. "The tooth was substandard, what would you have done?" he responded.

Truly sticking to the Tooth Fairy character, Warren then went on to explain that his letter wasn't as harsh as people were making it out to be. "I'll admit it might have been a bit strongly worded," he told the show, "but you have to understand the conditions we Tooth Fairies have to work in. It would give anyone a headache."