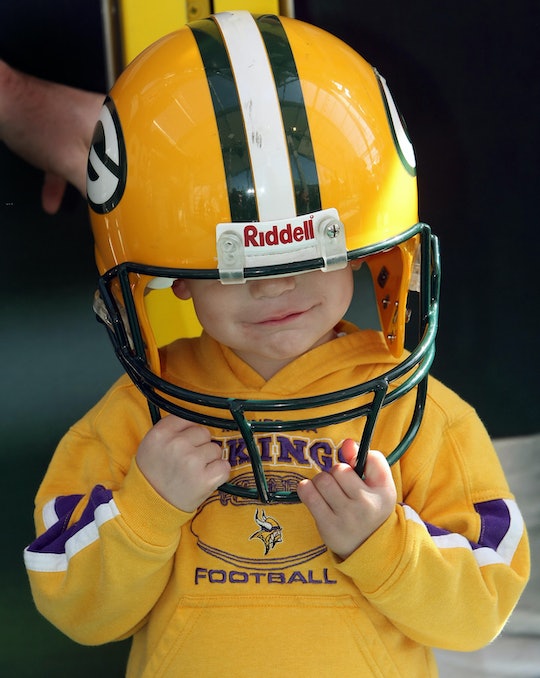 I am the mother of four sons. I raised them on my own from the time my oldest was 9 years old and my youngest was 2. I taught them to read, encouraged them to embrace music, spent hundreds of hours exploring with them. Beaches, forests, new cities; whatever caught our fancy. We were a pod, the five of us, the same in all the ways that mattered. So I told myself. That was before football. After reading this dad's essay about the hard parenting decision of whether to let your kid play football, it reminded me of how powerless I felt against the fever that was football in my sons' lives. And how discounted I felt in the decision process in general.

Luke Zaleski, a fact-checker for GQ and father, recently wrote a moving essay about the difficult decision he made to allow his 8-year-old son Wyatt to play football. Beyond his own very real concerns about the physical dangers of the sport — the concussions, the broken bones, the long-lasting affects of potential brain injuries — Zaleski noted the social implications of willingly participating in a sport that propagates physical aggression. According to the GQ piece, he wrote about telling some moms about his potential decision:

When they realized I meant tackle, it was like I'd just said I'd been teaching my son how to handle a loaded AK-47 on a roller coaster I'd built myself out of jagged scrap metal I found at a Superfund site. No one actually called me a monster out loud, but I think that's just because they were speechless. One mom excused herself, got up, and walked out of the kitchen. They were shook. So was I.

I understand Zaleski's fears for his son, but I envy his role in the decision-making process. When my two oldest sons told me they had tried out for the football team, I was an afterthought. Inconsequential. Despite having raised them largely on my own, this was apparently their father's realm, a bond cultivated on weekend visits in front of the television with nacho dip and manly slaps on the back I never got to witness.

Ultimately, my worries were treated — by my sons and their father — to sitcom-level eye rolls. As though the eventual (and frequent) trips I would take to the emergency room with my children for a bruised chest wall, a dislocated shoulder, a concussion, were simply a 3-minute bit we were performing for the studio audience.

No, I was not a headliner in this story line; that was their father. As Zaleski noted in his essay, his son was watching him watch football from the age of 3:

That was the first time it really sank in what “role model” means to a 3-year-old, which is basically: Do everything he does.It forced me to take a quick inventory of the behaviors I model for him. Every Sunday, I drink and eat and watch the games. I don't bet, play fantasy, or listen to sports radio, but I care. I get caught up. Frederick Exley best summed up a relationship with football like mine in A Fan's Notes 50 years ago: “Perhaps it was no more than the force of a forgotten childhood. Whatever it was, I gave myself up to the Giants utterly. The recompense I gained was the feeling of being alive.”

Zaleski went on to talk about the sheer physicality of his son, and this resonated with me as well. I saw the positive benefits of playing football as they happened; while my house was once a constant, playful battleground for my sons (who always wrestled rather than hugged), they were calmer once they played. More centered. They became more disciplined at school and at home. And their friendships on the field have stuck with them since.

After months of soul-searching and deliberation and consideration, Zaleski finally let his son play football. After all, he had played, as his brother and his father had. Also, as he wrote, he believed it was "just too weird not to let him play."

He reported that his son is faring well; eating loads of food, sleeping like a rock, getting plenty of fresh air and playing catch with his dad — all of which are definite bonuses to playing football.

My sons have also fared well. Looking back, football seems to have been good for them. It continues to strengthen their relationship with their father and each other.

Still... for years I felt as though I was being dragged behind a boat that was sure to sink. That one of my sons was going to be permanently injured, that football might change the sweet boys they had been into men I wouldn't recognize.

That my opinion and my voice were meaningless when it came to football. Because I was just the mom.