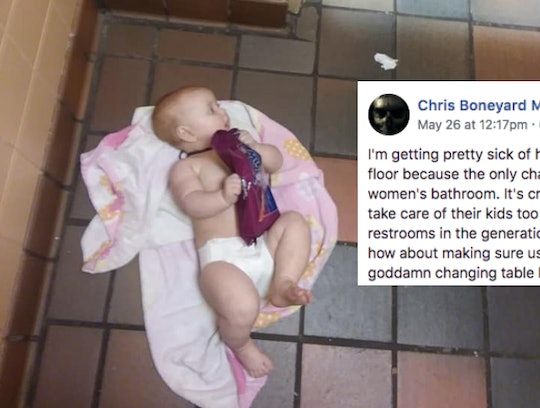 This Dad Is "Sick" Of Not Having Diaper Changing Tables In Men's Rooms & Honestly, Amen To That

Babies need to be respected as people with access to sanitary conditions, whether they are accompanied by their mother or their father. It might seem like a very basic idea, but the way our society approaches the responsibilities of parenthood can be revealed in how our world is set up. As Chris Mau documented in a recent Facebook post, there are still improvements that need to be made on that front.

"I'm getting pretty sick of having to change my daughter on a disgusting floor because the only changing table in the place is located in the women's bathroom," Mau wrote on Facebook. "... If it's a public place with public restrooms in the generation of equality among genders and races then how about making sure us fathers can change our children's diapers on a goddamn changing table like the mother's can. Am I asking too much?"

Attached to his post is a photo of the restroom and his daughter, lying on a towel on the restroom's floor.

It's shocking, but it's an oversight other parents have noted on social media, too.

No parent's first choice is to change their baby's diaper on a dirty floor, but Mau clarified in a post for Love What Matters that he had no other choice. He had taken his 8-month-old daughter, Kali, on a walk when he realized she needed a diaper change. In his post, Mau noted that he went to a restaurant nearby because it had a play place. "Figuring they must have accommodations for parents to change a diaper, and our older daughters begging to play in the indoor tunnels, we marched in," Mau wrote for Love What Matters.

Due to the lack of a changing table, and no car for a quick ride somewhere else, Mau wrote that he had no option but to change his daughter on the floor with a blanket. "With Kali crying I had to make the hard choice between either making her wait until we found a facility that had a changing station, or ease her discomfort and change her in the bathroom anyway," Mau wrote, which is something parents and caretakers alike can relate to.

When a child in your care is visibly uncomfortable, you're going to do whatever you can to ease that comfort — even if the accommodations are less than ideal.

"It all started off as a venting post to my friends," Mau told Romper. "My settings were originally set on private and one of my friends convinced me to change it to public because he felt something like that should be seen by more than my friends."

So far, Mau's Facebook post has been shared almost 145,000 times and has amassed more than 63,000 reactions. "I never thought it would go viral," Mau told Romper, but he noted that it helped him become aware that this issue wasn't unique, but "commonplace worldwide".

And it's true. Last year, for example, HuffPost reported that New York City council member Rafael Espinal was inspired to look into the issue after seeing a dad changing over a bathroom sink in Queens. Although Espinal found women's restrooms are more likely to have changing tables, it wasn't actually a guarantee. "Parents should be changing their children’s diapers with a little more dignity, in a space that’s sanitary," Espinal reportedly told HuffPost.

As a result of his findings, according to the New York Daily News, Espinal introduced legislation requiring all new developments to provide changing tables in both men and women's restrooms. Adding more changing tables to men's restrooms helps address one portion of the problem, but the reality is that gender's complicated. Some parents either don't want to or won't feel safe using either restroom, but that doesn't mean neither them nor their kids should have places to go.

Some people are advocating for more family bathrooms and overall gender-neutral spaces, as Teen Vogue reported. Family bathrooms and gender neutral restrooms make life much easier for parents with older children, who may be potty trained but are still too uncomfortable to venture into public restrooms alone.

Overall, the lack of changing tables in not just men's rooms, but across the board, reveals how infants often become an afterthought in design processes — and it's not OK. Children of all ages should be accounted for, particularly when designing buildings intended for all ages. No parent should be unable to take care of their child's needs because the space simply didn't account for them.

"Parents are reaching out to me thanking me for the post and telling me how they too have faced this problem in both male and female restrooms," Mau told Romper. "Overall and if nothing else I hope this helps bring positive change for parents and children alike worldwide."