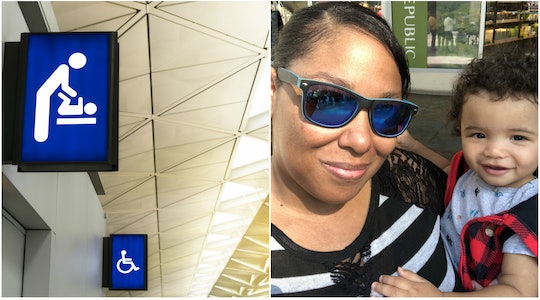 Shopping with four children is never easy. I have three pre-teen daughters and a toddler boy. The girls are pretty self-sufficient in the bathroom, but of course I never really send them in by themselves. In this day and age, and with my paranoia, I fear sending them anywhere by themselves, even if I'm waiting right outside. And god forbid I'm by myself, without the help of my husband — have you ever tried to fit five people in a toilet cubicle? Efforts to help with this issue, like New York City's legislative bill requiring all new developments to include change tables in men's as well as women's bathrooms often focus on the wrong piece. We are a mother and father of girls and boys — no matter where we go, we will have the same quandary: send the boy into the women's bathroom, or send the girls into the men's (no, I will not). What we really need is more family bathrooms.

There isn't a ton of action in this space since it's harder to retroactively create a family bathroom than simply bolt a change table onto the wall. Change is glacial: the American Restroom Association has "World Toilet Day 2016" listed on its website as a "current event." Much of the conversation around bathrooms of late has focused on transgender issues, lactation rooms, and getting baby change stations put in male bathrooms. But families need an adaptive fix. We need to talk about family bathrooms as an accessibility issue.

Our little Kai is 1 and freaks out in public bathrooms — there are people he doesn't know, the toilets always flush really loudly and the hand drier is so loud even I jump. This is an issue whether or not he is in the gents' or ladies'. When I shop with my husband, I'm in charge of taking the girls to the bathroom and my husband is in charge of taking care of wet or poopy diapers. Since Kai is afraid of the public bathrooms, he finds other places to change him, lying flat in his stroller, on a seat in our van, across my lap, and so on.

But then there are times we find family bathrooms, and it's as if the heavens have smiled down upon us. It's always an exciting moment for a big family with lots of kids when you go to a new place and find that third bathroom! I can't even count how many times have I gone places and had to wait in line in the women's room for my little girl to have to use the potty, especially when they were younger and had a harder time "holding" it. Of course, there are times when we have to wait for the family bathroom because another family has gotten to it first. And I know what it's like to have more than a few kids who all have to use the bathroom, wash their hands, dry their hands, and so on. It can take a while.

Just this week, I went into the Target near my house with all four kids. My husband was at work and I had parent-teacher conferences at my daughters' elementary school. After getting great reports on all three girls from their teachers, I promised to take them to Target to get a snack. Having little Kai in his stroller, we made our way through the store when Laila announced she had to use the bathroom. It was a really new Target, open less than a year, and it happened to have a family bathroom. We got to it, and the door was locked. I assumed another family was in there and waited. All five of us, stood there waiting. It seemed to take forever! Finally, I told Anneka, who's 11, to go ahead and just take Laila into the women's bathroom while I waited with her other sister, Mia, and Kai outside.

After the girls came out, we began to walk away when the family bathroom door opened and out walked not a family, not a parent and a kid, but one of the Target workers. An adult man. I rolled my eyes at him and we went about our shopping trip. Of course, there's no rule against using the family bathroom. It's not against the law and not a punishable offense, but seriously, he couldn't just use the men's room? And I'm pretty sure as an employee of the store, you probably weren't supposed to be using that particular bathroom. But I digress, because having a family bathroom in that Target will make me and other parents go there more often, instead of the other two Targets in my area.

All stores need to realize the need for the family bathroom. Not just because some babies are afraid of the noise of a shared bathroom, but because it's more convenient, especially when you have more than one child. Even when you have one child, it's a stress taking them into either the men's or women's room. You have to find the big enough stall to fit the both of you, which is usually the handicapped stall which I never feel comfortable using.

A lot of stores in my area have family bathrooms. A few other even have all-gender bathrooms, which acts as a family bathroom. A Trader Joe's near me used to have their bathrooms as men/women but now both are all-gender, which is helpful when you aren't shopping alone. Both bathrooms don't have stalls, they're just two regular bathrooms that are big enough to fit even four kids! In Ikea, the family bathroom is always cleaner. Perhaps they have different cleaning standards or clean it more often, since it's supposed to be for young kids? Not only that, but there's even a small child-sized toilet, across from the regular sized toilet, so it's easier for small kids to get on and off. And there's a small sink for them to use! There's one on every floor of the store so I've never had to take my kids into the regular women's bathroom. The changing table inside is pretty clean and I change Kai's diaper while each girl takes turns using the bathroom and washing their hands. Most importantly, each family bathroom is huge! Our whole entire family of six fits in there, including Kai's stroller. Nordic family values coming through for the win!

All the options for dealing with children of a different gender when it comes to bathrooms are bad. Kids tend to get sidetracked, or start playing around instead of what they're supposed to be doing. You worry about what they will see in a restroom, if they are unaccompanied. You worry they aren't safe. Family needs aren't nothing — it's time to stop dividing families up by gender, and provide a private, clean space where we can go to the bathroom in peace.

More Like This
From Captions To Gifts, These Are All The Kindergarten Graduation Ideas You Need
These Stepmother's Day Instagram Captions Are Straight From The Heart
Stepmom Quotes & Sayings For Every Occasion
My Nanny Showed Me How To Be A Mother