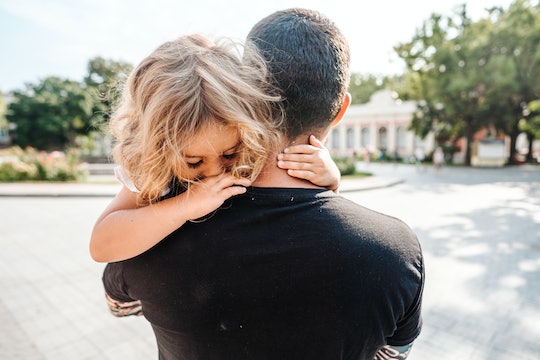 Um, Can I Go Into The Women's Restroom If I'm A Dad?

I'm the father of three girls, ages 8, 6, and 2. I'm frequently out and about without my spectacular wife, and I'm never sure what to do when one of my daughters has to use the bathroom. I don't want to send them into a strange bathroom alone, but I can't go into a woman's bathroom. And I don't want to expose them to the nastiness of a men's bathroom, including the men who are in it. One time I brought the middle one in with me. She couldn’t stop staring at the dudes peeing into urinals, and I thought, I'm never leaving the house again!

Sometimes the Big Girl will lead the charge of girls into a women’s room alone, but if she doesn’t have to go, she usually doesn’t cooperate. Plus, I worry I'm abdicating my dadly responsibilities if I leave them to figure it out on their own — I mean going to the bathroom is daunting for adults as well as kids, judging by the state of our local public restrooms.

What should I do?

When I was about five years old, my father would take me to the local swimming pool. Since my mother was at home, lying prone on a daybed and lamenting why she ever a) got married, b) had a baby, and c) had another fucking baby, my father was in charge of getting me into and out of public bathrooms, not only to pee but to change my swim suit. Although the pool was a magical place where one could hold up the entire line for the diving board by performing dance routines over the water, out of reach of the lifeguards and one's father, I felt incredibly uncomfortable in that windowless, white-tiled side room, because even at that age I knew MEN'S BATHROOMS WERE WHERE THE PENISES WERE.

My son has just discovered his penis. He is six months old. Every time I take his diaper off, WHAMMO, his hand goes straight to his penis. It's how I know he's right-handed. He scrunches his scrotum. He pinches his tiny dick, which looks like a very pale multivitamin. He gets a faraway look on his face, and he gives me a half-smile. Then he smacks the whole caboodle with his hand, which brings a peculiar look of pain onto my husband's face.

He doesn't know it yet, but my son is going to be coming into the women's bathroom with me until he's 10, or else he can PEE IN A JAR YOU ARE NOT GOING IN THE MEN'S BATHROOM BAD THINGS HAPPEN IN THERE.

When it comes to kids, the only combination that *DOES NOT WORK* is Child Alone in Men's Bathroom.

Some days, it seems like one's sole directive is separating one's children from adult penises and the things that come out of them. On others, it seems like it's advocating for MORE ALL-GENDER AND FAMILY BATHROOMS, all of which are CLEAN and have CHANGING TABLES ARE YOU FUCKING KIDDING ME WHY ARE THESE STILL ONLY IN WOMEN'S RESTROOMS.

When it comes to kids, the only combination that DOES NOT WORK is Child Alone in Men's Bathroom. When you're a mom, you can take any kind of kid into your bathroom and, on the whole, not worry about: Pee on the walls! Pee on the floors! Pee in the sinks! Glory holes!

When you're a dad out in the world with your girl(s), you have three options.

One is to send them into the women's bathroom alone, and ask the gender that generally does not start world wars or count serial killers as a segment of its population to keep an eye out.

The second involves something I call the Too Much, Too Soon Activity Kit. You can get many of these items for free on any international flight! Slap an eye mask on your daughter, plug ear buds into her ears, lead her into the men's bathroom past the urinals, and walk her into a stall. Whip out your spray bottle of bleach, wipe down the toilet seat, and give her the travel packet of Kleenex you always have with you WHAT WHY NOT PARENTING FAIL. When she's done, put her eye mask back on and her ear buds back in, hold her over the sink to wash her hands, and walk her on out of there to a brighter future.

As for the third option, countless dads discount it from the beginning, but according to my best friend from the eighth grade, it's "the only viable option in a real-world scenario": MARCH THAT PRECIOUS CHILD INTO THE WOMEN'S ROOM WHO CARES WHAT THOSE BITCHES THINK.

I'd much rather see a younger version of myself in the women's bathroom with a well-behaved guardian than know she's next door in a stinkhole of depravity.

My friend's husband has taken their daughters into countless women's restrooms, and they live in a red state. Says she, "You really need a safe space for [your daughter] to pee, and the fact is, that's the women's bathroom. You can't just ask some stranger to check if your four-year-old wiped her butt good enough or make sure she doesn't clog the toilet with too much TP. If your kid needs bathroom help, you gotta do it, [and] dads need to be able to help with that stuff. [My husband] was way more concerned about my daughter's experience than that of any woman who might be offended by a man in her bathroom."

Women know men's bathrooms are disgusting. WE KNOW. And sure, we would like for men not to encroach upon women-identified territory. But this isn't about you; it's about your daughter. You might run into some frowns, but dads, consider taking your daughters into the safest space, NOT ACTING LIKE A CREEP OR MAKING AWKWARD JOKES OR SNEAKING IN BUT KNOCKING FIRST AND ANNOUNCING YOU'RE COMING IN WITH YOUR DAUGHTER AND WITH EYES AVERTED LETTING HER LEAD YOU STRAIGHT INTO A STALL. I know I'd much rather see a younger version of myself in the women's bathroom with a well-behaved guardian than know she's next door in a stinkhole of depravity.

THIS SITUATION IS AWKWARD AND YOU'RE JUST TRYING TO MITIGATE WORST-CASE SCENARIOS. BUY MY ACTIVITY KIT BY PAYPALLING ME $14.95. YOU GOT THIS.

Are you currently asking yourself What The Actual about a parenting sitch? Send a question to Jenny by emailing advice@romper.com.