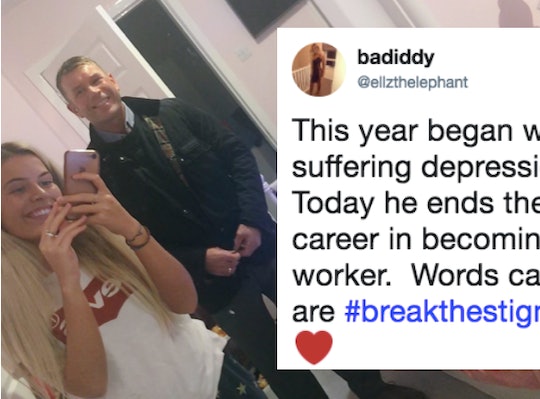 Parents often reiterate how proud they are of their children, but it's much more striking when those kids grow up and support and applaud their parents, and even help them deal with some serious issues. Perhaps that's one of the many reasons this one daughter's tweet about her dad overcoming depression is resonating so hard on social media and beyond. What started out as 19-year-old Ellie Wilkie's heartfelt ode to her dad after he went from having attempted suicide to starting a new job as a recovery support worker in less than a year has mushroomed into a global conversation about stigmatizing mental health. And it's just the type of story that so many families may need to know, that there's always hope when it comes to mental health crises — and the critical value of family support.

The story, sadly, starts with a suicide. In 2014, Brian Wilkie's son, Jordan, who was 22 at the time, killed himself, according to BuzzFeed news. It was, no doubt, an unimaginably devastating event that caused the Edinburgh, Scotland, father's life to "[spiral] out of control," as he recently told BuzzFeed News. His subsequent depression ultimately caused him to attempt to take his own life in January 2017. At the time, he simply felt like "nothing was left" for him — but afterwards, when he turned to his wife and three daughters for support, he knew he had to make a real change.

Her tweet, accompanied by a casual mirror pic of the two of them together, does not sugarcoat the reality of mental illness and depression, nor does it shy away from it. In it, she shared that it was the first day of her father's new job — where he would help people with addiction and mental health issues — after he tried to kill himself relatively recently. "Words can’t describe how proud we are #breakthestigma. It’s okay not to be okay," she wrapped up the tweet.

The tweet, of course, went viral, racking up more than 168,000 likes and nearly 30,000 retweets (as of Wednesday evening) in the week since it went live. But, it was a process for the family to get to where they are now. As she explained to the BBC in the wake of the popularity of the tweet, she felt like she lost her dad the day of his suicide attempt, and resented that he would choose to leave her and her three sisters behind.

Now that he has given up coping mechanisms such as drinking and gambling and made huge strides toward recovery, Ellie is focused on tearing down the stigma associated with mental health issues, as her chosen hashtag suggests, as she told the BBC:

I wanted to tell everyone who may also be suffering it's OK not to be OK, particularly because men are stereotypically supposed to be the strong ones. I wanted to share awareness and fight back against the "just get over it" attitude, especially on my brother's behalf. Everyone has their dark days, but you are not alone.

Her message was so powerful that she and her dad were even invited to share their story on the British daytime show This Morning, although their segment was bumped after they traveled to London on Monday because of the news of the royal engagement. The show subsequently issued the father-daughter pair an open invitation to return to share their story on-air whenever they can.

What really matters, though, is that others who are either dealing with depression, or love someone who is, will hear this story and know that there is hope and that depression is nothing to be ashamed of.