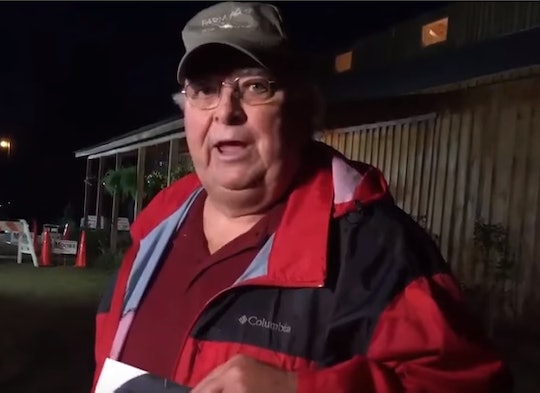 Alabama former Chief Justice Roy Moore is hoping to be elected to the Senate. As the state (and the nation) waits to see whether he will win Attorney General Jeff Sessions' vacated Senate seat on Tuesday, one person in particular is hoping to keep Moore out of that post. A peanut farmer named Nathan Mathis, who stood outside a rally for Moore on Monday, cautioned voters against choosing Moore. While there are plenty of people out there who don't want to see Moore take office, the video of this dad protesting Moore on behalf of his daughter is particularly impactful. Because Mathis' daughter was gay. She committed suicide when she was just 23 years of age. And her father doesn't want to see a man who considers gay people "perverts" making decisions for the rest of the country.

As a refresher, according to CNN, Moore said in 2005 that he believed "homosexual conduct should be illegal" and has been incredibly vocal about his homophobic beliefs. So much so that he was taken off the Alabama Supreme Court for refusing to enforce the U.S Supreme Court's ruling to allow same-sex marriage in 2016, according to Vox.

So on Monday night, Mathis went to a Midland City, Alabama rally and held a picture of his daughter in her basketball uniform as he stood in front of a sign that read:

Judge Roy Moore called my daughter Patti Sue a pervert because she was gay. A 32-year-old Roy Moore dated teenage girls ages 14-17. So that makes him a pervert of the worst kind. Please don’t vote for Roy Moore.

When local reporters questioned Mathis about his protest, he explained in a video that has already been viewed more than 3 million times:

Judge Roy Moore called [my daughter] a pervert for one reason — because she was gay. If he called her a pervert then he called your child a pervert if she was gay or your son was gay.

A reporter asked if he was "blaming" Moore, who is running against Democrat Doug Jones in the special election, for his daughter's tragic suicide. He clarified that he wasn't, and also got painfully honest about his own history of making anti-LGBTQ comments:

I was anti-gay myself. I said bad things to my daughter myself, which I regret. But I can’t take back what happened to my daughter, but stuff like saying my daughter’s a pervert, sure, I’m sure that bothered her.

Mathis' daughter is gone, and he has to live with that fact every single day. As he wrote in a 2012 letter about his daughter to The Dothan Eagle:

I only know I miss my daughter Patti very much and I am grateful for having her as my daughter.

Now, in 2017, Mathis is doing the one thing he clearly believes will honor his daughter's memory the best way he can.

He's trying to make sure someone who has voiced harmful homophobic rhetoric like Moore will not make it to the Senate for so many reasons, like the sexual misconduct allegations which have been levied against him regarding underage girls (Moore has firmly denied these allegations, according to Newsweek.). According to Vice, Mathis told reporters, obviously emotional:

You’re supposed to uphold the constitution. Constitution said "all men are created equal." Well, how is my daughter a pervert just because she was gay? ... We don’t need a person like that representing us in Washington.

Hopefully the people of Alabama will pay attention to Mathis' honest, plainspoken plea. Because I doubt it was easy for him to stand outside a rally, talking about his deeply personal tragedy. He did it in memory of his daughter. And for other people's children, who shouldn't have to worry about their rights under someone like Moore.