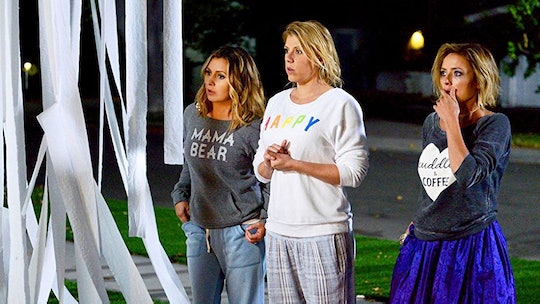 It happens to all of us, doesn't it? You're trying to plan something epic, you're stressed about it, and maybe you're not doing all of the appropriate research before finalizing details. It's human nature to make mistakes, and no one understands or accepts that more than parents -- especially moms who are doing it ALL. In this exclusive clip from Hollywood Darlings, Jodie Foster suffers a hilarious mom fail by hiring the wrong kind of magician for a kids birthday party. Fair warning: if your sense of humor isn't open to dirty jokes, this one might not be for you!

So, how does someone go about ordering the wrong kind of magician? Actually, is there even a wrong kind of magician? Apparently yes, yes there is. In the hilarious clip, which you can watch below exclusively on Romper, Jodie greets the hired magician face-to-face among total birthday party chaos. When the magician realizes it's a party for kids he is quick to reveal his true profession: he's an adult magician. Like, an adult magician. Get it? Well, if you don't, the clip itself will explain it -- especially when Steve Wonder pulls a, uh, rabbit out of his hat. Watch below:

This is a mom fail to the max! But it's also a (pretty hilarious) honest mistake, right? Even Jodie questions why he would be upset about it being a kids party when she says, "You're a magician, what else would it be?" As you have already seen, that's when Steve Wonder brings out the x-rated prop none of us saw coming. Eek!

However, once you know what Steve Wonder's gig is you realize that everything about him has been a red flag. For starters, Jodie met him in a parking lot -- where it feels safe to assume she also hired him to work the party. Not exactly a great idea, especially when you are planning a party for children! And lets not forget that when Steve arrives he almost immediately tells Jodie he's going to need a ride home once the party is over. Hmm. Why would someone hired to perform at a party not secure themselves transportation? Now that we've pointed out all of these things you'll be seeing red for the next few days. Sorry!

So, what happens once Steve reveals he's an x-rated magician who can't turn his adult tricks into kid-friendly tricks? Well, you'll just have to tune in for the Wednesday, June 6 episode of Hollywood Darlings to find out. The show is on at 8pm ET on PopTV, but be sure to check your local listings ahead of time just in case.

On Hollywood Darlings, Jodie is portraying an "exaggerated" version of herself alongside two other former child stars: Beverly Mitchell and Christine Larkin. Mitchell is best known for her role as Lucy Camden on 7th Heaven, while Larkin played Al on TGIF's Step-By-Step back in the day.

Romper recently spoke to Mitchell about the show, and she said the experience of working with Sweetin and Larkin is unlike any other. "I mean, we're a small group of people who did very strange things for jobs at a very young age. There's something that binds us together and creates an understanding for us that no one else gets," Mitchell told Romper for our Claim to Fame series.

Strange jobs? Sure, but at least they weren't x-rated magicians!