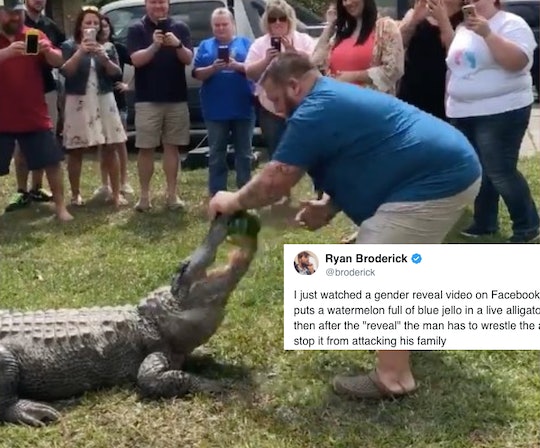 It's no secret that sex reveal parties have gotten a bit out of control in recent years. Case in point: This family used an alligator for a sex reveal and it might be the most over the top reveal to date. And if you have *questions* — like where the family procured the dang alligator from — rest assured that you're not alone.

For many people, sex reveal parties are fascinating. From the elaborate reveals (there are too many examples to list here, people) to the highly produced videos documenting the event, there is a lot of intrigue surrounding sex reveal parties these days because of how *extra* they've become. I mean, I think it's safe to say America has jumped the shark when it makes the move from cakes filled with blue or pink icing to sex reveal parties hosted by alligators. Just my two cents.

That being said, each family is different and pregnant people can do whatever the heck they please. And for dad-to-be Mike Kliebert (aka the "Gator King") his idea of sex reveal parties involves alligators. But before you ask the reasonable question of "why?" it's important to understand Kliebert's background. It turns out that Kliebert owns the famed Kliebert's Turtle & Alligator Farm in Hammond, Louisiana, and he bills himself as a "alligator wrangler, trainer, and tour guide," according to Fox 6 Now.

Making matters even more interesting is that the farm was established in 1957 and Kliebert grew up alongside gators. "I was raised on Kliebert's Turtle and Alligator Farm," Kliebert writes in his Facebook bio. "It was here, on the first and largest active farm in the United States where I discovered my heart and passion lie. I began my dream at very young but eager age of six when i started diggin' turtle eggs and working near these large dinosaurs called alligators."

And given Kliebert's passion for alligators, it actually makes sense that he decided to enlist one of his reptilian pals to help out with his sex reveal party. As for Kliebert's partner and the mother of his baby, Rebecca Miller, it appears that she was totally on board with the idea too.

Luckily for all the curious people out there, Kliebert and his mom, Melody Kliebert, uploaded footage of the sex reveal to Facebook on March 25. In the wild videos, Kliebert can be seen approaching an alligator with what appears to be a ball of some sort (it's a hollowed-out watermelon) while an excited crowd cheers him on. Kliebert then attempts to pry the alligator's jaw open for what feels like a few tense minutes. Finally, the likely confused creature bites down on the watermelon to expose colored goop. Pretty wild, right?

Watch the video below to find out the baby's sex:

Yep, Kliebert and Miller are having a boy.

But wait, this story isn't over just yet. Following the sex reveal, Kliebert and Miller posed for an *interesting* photoshoot alongside the alligator.

Of course, people have some *thoughts* about this sex reveal stunt.

This sex reveal is likely to bring up an important conversation about why society places such an emphasis on sex reveal parties and why people need to reinforce the social construct of gender. Personally, I'm a bit tired of it all. But, until the world catches on, people will probably continue to try and out-do others with their big announcement.