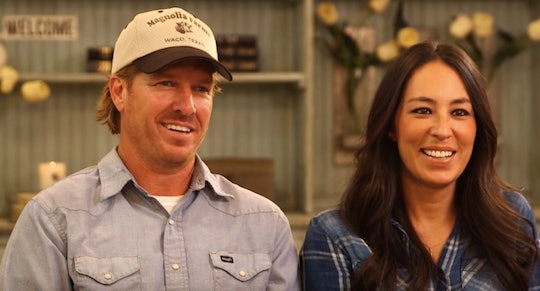 When Chip and Joanna Gaines took to Instagram in January to announce the impending arrival of their fifth child, fans were thrilled. Shortly after the exciting announcement, the Fixer Upper stars' most loyal supporters began to wonder when they'd announce more details about the baby, including its sex. If you're one of those curious people, you'll probably be very interested in this fan theory about the sex of Chip and Joanna Gaines' baby. It seems like the internet might have figured it out.

On Thursday, shortly after Joanna debuted the first pic of her bump on Instagram, she took to her Instagram stories to share an update about one of her many (she literally has a billion things going on) projects. The story, which has since disappeared, shows Joanna sitting on a gorgeous rug and her hands, which she shaped into a cute heart, are placed over her belly.

Joanna captioned the snap, according to Cafe Mom:

I like this rug a lot. Available this Spring. #eviecollection.

At first glance, the story doesn't seem to hold any potential clues about the Gaineses' little one. Joanna and Chip promote their home goods on social media all the time and they come up with new collections often. But if you look closely at the message's hashtag, you might notice a potential clue about baby number five.

So, what theory have fans cooked up? Apparently, there are many people out there who believe the Gaineses are having a... girl. Yep, fans are convinced Joanna and Chip are preparing to welcome a little girl named "Evie" into the world this summer. Obviously, fans came to this conclusion based on the "Evie Collection" hashtag.

Some astute fans pointed out that the Gaineses chose "E" names for both of their daughters, Ella and Emmie Kay. If Joanna and Chip are sticking to this pattern, there's a good chance their next baby is a girl.

Needless to say, fans were thrilled that they might have cracked the code. "Did you catch the name of the collection? EVIE! It's a GIRL guys! Their girl's names all start with E," one person commented on Facebook. "I was just thinking the same exact thing, someone else chimed in. "They do E names for girls and D names for boys. The collection is EVIE. It makes total sense."

Although most fan theories tend to be a bit out there, this one seems pretty believable. Not only is the "E" name trend pretty telling, but I also find Joanna's pose in the Instagram snap interesting. Why did Joanna put so much emphasis on her bump in the shot? And why does she like the Evie Collection "a lot"? It sounds like Joanna is especially connected to the Evie Collection. *Pulls out microscope* Hmm.

That being said, I think it's important to keep in mind that Joanna and Chip don't owe their fans anything, especially when it comes to their new baby. The Gaineses deserve to keep the baby's sex private if they so choose and they probably want to enjoy this special time with loved ones before they share the news publicly.

The Gaineses, after all, are pretty private and protective when it comes to their four kids: Drake, Ella, Duke, and Emmie. In fact, the safety of their children was one of the rumored reasons Chip and Joanna ended Fixer Upper after five seasons.

"People drive by and like to take pictures in front of their house," a "source" told Us Weekly in October. "I think they just want to take a step back from it."

So, don't hold your breath for a sex reveal in the coming months. There's a good chance Joanna and Chip are keeping the sex of their baby private until the birth, which makes total sense given their need and request for privacy. I won't be surprised, however, if baby number five is a girl.