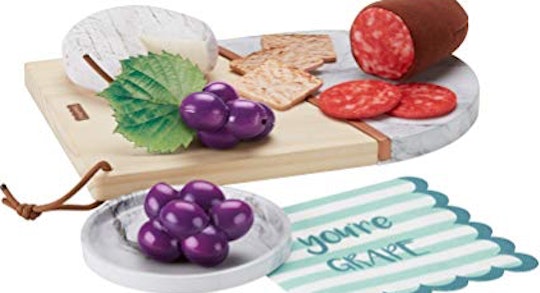 Even *I* Want To Play With This Fisher-Price Charcuterie Board

Do you find yourself parenting an exceptionally fancy toddler? Say, a 3-year-old who won't throw just any old stuffed animal into the toilet, or wear just any mixing bowl as a hat? No, you have a toddler with high brow tastes. Which is why this Fisher-Price charcuterie board may well be the perfect gift this holiday season.

Called "Snacks for Two," this 15-piece pretend play set features a full spread of soft salami that can be "sliced" with the faux knife, a set of pull-apart grapes, some fake crackers, as well as a squishy little wheel of brie that you are going to have to work very hard to not grab and sink your own teeth into. It all comes in a fancy little box that includes a faux marble cutting board, as well as dainty napkins and little plates.

Just as toy kitchens and tools allow children to mimic the activities of their parents, thus preparing them for the tasks of daily adult life, now little ones can sit down with this charcuterie and pretend "attending book club when you haven't read the book," or "meeting a friend to complain about your spouse while eating cheese."

Perusing some of Fisher-Price's other pretend play offerings, I see there is also a Farmer's Market toy. Which leads me to believe the Fisher-Price development team may be based in Brooklyn or Seattle. (No word on whether a Fisher-Price Vinyl Collecting Set or wooden Kombucha-Brewing Kit is also in the works.)

It's kind of hard not to laugh when picturing a group of kids who still utilize sippy cups sitting down to play with this thing. I mean what will the conversation entail as they delicately pass the grapes? Their critical analysis of Dragons Love Tacos? Whether or not Daniel Tiger should be impeached? Who are these children who go to their parents and say, "I want a charcuterie board for Christmas." I mean, I think it was only in the last five years I finally learned how to pronounce charcuterie correctly. (And I'm still not 100% I've nailed it.) I don't think I even knew what brie was until I was in my 20s. And I remember I had a friend whose boyfriend once saw a wheel of brie at a party and thought it was some kind of savory pie, and proceeded to cut and eat a slice with a fork. (Though perhaps these facts say more about me than they do the toddlers of today.)

One thing is for certain, you're going to find that squishy salami in a very strange place in a couple of months. Like in one of your rain boots. Or an empty box of tampons. And it's going to be covered in dust and bits of Cheerios, and will take you several seconds to register what it is. Because such is the way of toddlers, no matter how fancy they may be. As for where that little brie will end up? God only knows.