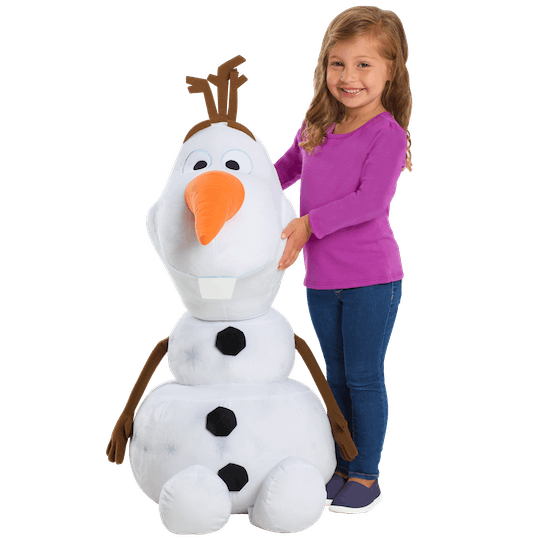 With This 'Frozen 2' Giant Olaf Plush, Who Would Want To Build A Snowman?

Yes, most families are counting down to Halloween, but you know what national holiday comes next? The release of soon-to-be-family-favorite Frozen 2, in theaters November 22. And what better way to celebrate than with a Frozen 2 giant Olaf plush to hug? Honestly, there probably is no better way.

Disney is hosting an online Frozen Fan Fest, a global celebration of a whole slew of new Frozen products inspired by the new film, all of which were released on October 4. The new products include everything from toys and costumes to home decor and bedding. Of course, there's also clothing, accessories, shoes, games, books, and even more, like reusable water bottles! Some toys even reveal never-before-heard songs from the soundtrack and never-before-seen outfits and moments from the movie itself.

Spotify users can also join in the Frozen Fan Fest fun by checking out the Frozen 2 playlist, which features snippets of three songs from the new soundtrack that are sure to be just as beloved as "Do You Want To Build A Snowman?" and "Let It Go." You can listen while playing with your kids' fave Frozen toys, or on the way to pick up their new best friend. Speaking of...

Giant Olaf plushes are available now at major retailers like Target and Amazon. This larger than life plush is made with extra soft fabrics (so he's extra snuggly) with new, blue snowflake details. He measures approximately 32” tall, making him perfect for big hugs and leaning back against to relax while reading, doing homework, or rewatching the Frozen movies at home. His signature toothy smile, charcoal buttons, stick hairdo, and carrot nose are sure to make him one of your child's most beloved playmates. This toy is recommended for children ages 3 and older to prevent choking.

While he may be a bit too big to sneak into the movie theater to see Frozen 2, the movie definitely sounds like it's worth seeing on the big screen, especially for super fans. So far, Disney has revealed the movie will take Elsa, Anna, Kristoff, Olaf, and Sven on a journey outside of Arendelle to learn more about why Elsa was born with magical, wintry powers. They'll encounter dark, dangerous seas, enchanted forests, and autumn scenes. And while Elsa used to want to keep her powers secret and under control, she may have to let them go in order to save her loved ones and her kingdom in the sequel.

If your son or daughter loves Olaf, there are plenty of other new products featuring him, too. The Disney Frozen 2 Follow Me Friend Olaf plush retails for $50, and is also available at major stores. He comes with a snowflake remote control that puts him in motion and brings him to life with phrases and music. His mouth moves, his head turns side to side, his eyes open and close, and he can even raise his eyebrows in surprise. Olaf can even follow the blue snowflake projection so your child can take him on their very own adventure.