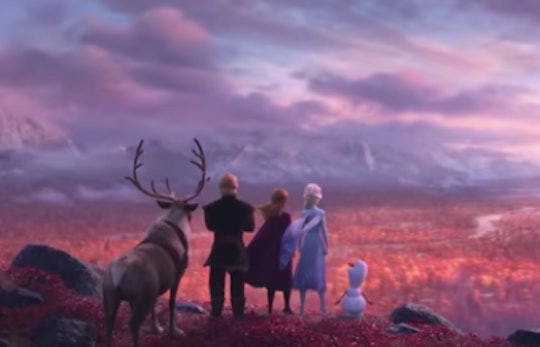 It's been six years since the original Frozen heated up screens all over the world with its tale of two sisters separated by one magical power. Now that the sequel's release is fast approaching, fans are starting to speculate wildly, and this Frozen 2 theory suggests a major conspiracy about the late Walt Disney's death that puts a unique spin on why the film was made in the first place.

Now, keep in mind, no matter what anybody ever actually ends up finding out about why Walt Disney Animation Studios decided to focus on a tale of snow and ice (if anything), I'm pretty sure practically everyone is glad they did.

Imagine a world in which little girls don't go through a phase of belting out Let It Go again and again. That would be a sad world. (Though some parents might argue otherwise.)

I personally have never known parenting without children who were sure they could focus and hold out their hands long enough... and something would happen. Mom life would be just too boring without this movie.

But as website Screen Rant reported, some conspiracy theorists have a different take on the motives for the movie: That Walt Disney himself was frozen upon his death, and the movie was made to redirect gossip in another direction.

In other words, the entire motivation for the movie was to redirect anyone's internet search from research about Disney himself being, you know, actually frozen to a Disney movie called Frozen.

Huh. I guess there is some reasonable backstory to why this conspiracy theory would even be circulating.

According to Screen Rant, Disney passed away in December 1966, feeling keenly that he wasn't ready to let go of his expanding empire. So the theory goes, the animator and theme park creator left orders to put his body on ice in an attempt to catch up with future medical advances and come back to life when technology allowed it.

Not only that, but a related Screen Rant video noted that theorists have added a flourish to the tale: That Disney's frozen body is buried underneath the "Pirates of the Caribbean" ride at Disneyland.

Now, leaving orders to have yourself "cryogenically preserved" might sound like something from a bad movie, but it is done, according to the website Mental Floss.

The site added several famous people are confirmed to have been frozen, including mathematician Thomas K. Donaldson, but that Disney's remains are in a regular old cemetery not far from his movie studio.

According to this wacky line of thinking, though, Disney the brand is so extremely protective of preserving Disney's image as a wholesome guy who launched a wholesome venture, that the company will do anything to keep "creepy" or unseemly out of the picture.

Such as making a movie about snow and ice to stop anyone from speculating that Disney, himself a smoker who died of lung cancer, would have gone to unusual lengths at his death, Screen Rant added.

PBS News Hour speculated about how this urban legend came to be, adding that investigative website Snopes.com has discredited the theory.

Still, PBS noted, Disney had an obsessive interest in the future, and it didn't help that some employees back in the day believed the gossip. Further, a French tabloid reported in the late 1960s that Disney's body was to be defrosted in 1975.

I feel like I need a nap with all this new info, but then again, fans can take it or leave it. With all sorts of news breaking about the movie's upcoming sequel — including speculation that Elsa might have a female love interest in the new movie, and that she won't be the only super-powered princess in the second installment — I still have no idea why the powerhouse movie studio behind made this fairytale to begin with.

But I don't much care. The original was a powerful story of sisterly devotion and the redemptive quality of love. I'll take my daughters to the sequel the very first day I can, whether the weird creation legend is, in fact, true or not.