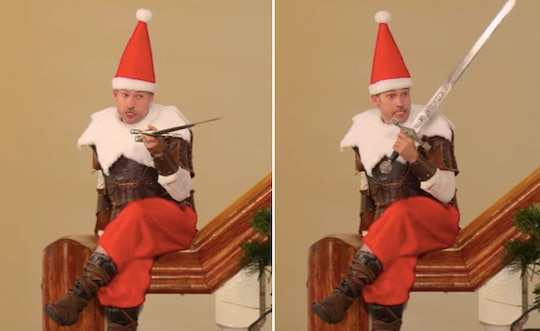 If you never thought you’d see Game of Thrones meet Elf on the Shelf, think again. Last night on Jimmy Kimmel Live!, Nikolaj Coster-Waldau — aka, the actor who plays Jamie Lannister on Game of Thrones — starred in a fake ad for "Lannister on the Bannister," a toy that will definitely scare your kids straight this holiday season. If you're the kind of parent who keeps forgetting to move your kids' Christmas elf because you're busy re-watching all seven seasons of Westerosi drama, then this Game of Thrones Elf on the Shelf parody was made for you.

Jimmy Kimmel first introduced the skit by talking about the "destructive force" that Elf on the Shelf had in his home. "It's tearing our family apart right now," he said. "We forget to move it almost every night."

Luckily for everyone involved, however, there's a new (OK, and also fake) option families can use instead of Elf on the Shelf, and that's Coster-Waldau's "Lannister on the Bannister." This version comes with a sword, mutton, and plenty of terrifying stories about red weddings, beheadings, and hands lopped off in order to keep your kids in line until Christmas. Or Hanukkah. Or the Three Kings. As Kimmel clarified, this HBO-style Elf on the Shelf alternative works with all religious holidays.

In the skit, Coster-Waldeau, (acting as Jamie Lannister, of course), warns misbehaving children that "winter is coming." He also regales them with terrifying tales to scare them into better behavior — including the following lovely story:

I once knew a man who broke his promise. Soon after, he and his entire family were invited to a wedding, and at that wedding hall, all the doors were locked so no one could escape. Then, they were all slaughtered, their bodies scored by arrows, sliced open by daggers, throats slit. That great hall became an ocean of blood. Now give your sister back her Hatchimal.

The infomercial offers prospective buyers that if they order immediately, they'll also get a "Targaryen in an Aquarium" for free. All they need to do is send in four installments of $19.99 — and, as Lannister warns the audience, "A Lannister always pays his installments."

Fans of Game of Thrones were quick to weigh in online with feedback, and unsurprisingly, pretty much everyone wanted a Lannister on the Bannister of their own — even those without bannisters. Or kids. Or an affinity for the whole Elf on the Shelf tradition in the first place.

This isn't the first Game of Thrones comedy sketch we've seen, either. Last year, Saturday Night Live parodied Jon Snow's resurrection scene, and the year before, actor Kit Harington helped Seth Meyers imagine what it would be like to invite Jon Snow to a dinner party (the answer, of course, is that it would not be great, folks. Definitely not great).

As a Game of Thrones fan myself, I'm totally appreciating the occasional reminders of the show. After all, Season 7 wrapped up back in August, which already feels like a million years ago, and — if we're going by what Game of Thrones' Sophie Turner told Variety recently — Season 8 won't be released until 2019.

Yep, that's an entire year of waiting for more Westerosi drama, you guys. I could barely keep all the different plot points and characters in mind when I was binging on the show, so something tells me I could use a Lannister on the Bannister over the next year just to remind me of the TV show's key details.

Now, where can I order this Lannister on a Bannister? (I'll also take that free Targaryen in an Aquarium, please.)