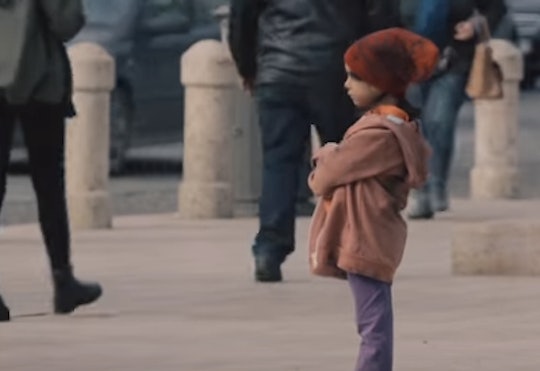 This Girl Pretended To Be Abandoned For A Social Experiment, & The Response Was Disturbing

What would you do if you saw a little 6-year-old girl alone on the street? Most people probably think they would help a child no matter what. No matter what their clothes looked like, no matter the color of their skin or the condition they are in. Well, in a recent social experiment conducted by UNICEF involving a little girl pretending to be homeless, the response was not what you might expect. In fact, it was downright disturbing.

A 6-year-old actress named Anano was asked to wander the streets of Georgia alone, but dressed in two different ways. In one scenario, Anano is dressed like a like a wealthy child. Her face is clean and her hair is brushed. In the other, Anano has a dirty face and wears older clothing. Members of a UNICEF team then filmed the different reaction of strangers to the two sides of Anano. The results were disappointing.

When Anano was dressed nicely, strangers stopped to check on her. They crouched down and asked her if she was alright. They smiled at her, straightened her coat, doted on her. In other words, they did exactly what people are expected to do when faced with a child wandering the streets alone. But how did they react when Anano was dressed like a "homeless" person?

Anano was largely ignored. No one stopped to ask her if she was OK, if she was lost, if she needed help. No one really even looked at her. Despite the fact that she is a small child and clearly not able to care for herself.

The next stage of the experiment had Anano enter a restaurant, looking first well cared for and then a bit grimy. The results here were so difficult for the little girl that the experiment had to be called off because she ran away crying. When she was dressed as a "homeless" person, she was told to go away; one guest actually called someone and said, "Take her away."

Anano told the producers; “Because my face was covered in soot and my clothes were all dirty. This made me sad. They were all telling me to go away.”

UNICEF partnered with Switch Communications, an advertising agency in Georgia, to produce the video in conjunction with a recent study to raise awareness for underserved children with their #FightUnfair campaign. According to the troubling report, 69 million under five will die of preventable causes before 2030, 167 million children will live in poverty, and 750 million women will be married as children.

UNICEF Executive Director Anthony Lake warns of a dire future, according to the campaign's website:

Denying hundreds of millions of children a fair chance in life does more than threaten their futures – by fueling intergenerational cycles of disadvantage, it imperils the future of their societies. We have a choice: Invest in these children now or allow our world to become still more unequal and divided.

Imagine what it must be like for children who live every day like Anano did for just a few hours. Hungry, invisible, afraid. Now imagine being the person to truly see them, to offer them help.

And that is the world we're supposed to live in. Class should be invisible. Children should not.