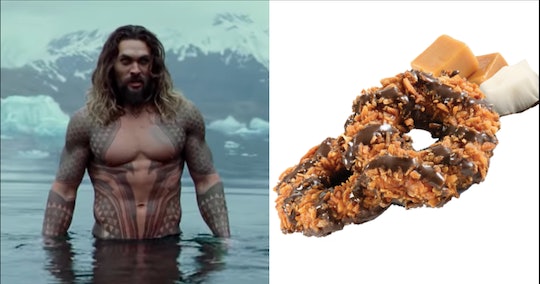 Some kids are just born to be marketing geniuses. An inner ear to the ground of what their potential customers might want and how to get it to them. Like for instance, if your customers are primarily moms, try to think of what moms really like. Do they like to eat cookies and also look at Jason Momoa? Why funny you should ask, yes indeed they do. So what's a young woman to do with such helpful information? Well this Girl Scout's shirtless Jason Momoa cookie boxes are just the sort of stroke of brilliance that comes along but once in a lifetime. Or else this girl will one day cultivate her powers into some sort of multi-million dollar business; it's anyone's guess at this point.

Charlotte Holmberg of Highlands Park, Colorado was trying to offload some Girl Scout cookie stock recently when she came up with a brilliant idea with a little help from a Twitter meme, according to NBC News Denver affiliate KUSA. As her mom explained to the news outlet, Charlotte was inspired by a Twitter meme that saw the Aquaman actor perched on top of a Samoa cookie.

For reference, the Samoa cookies are the chewy ones with chocolate and coconut and Jason Momoa is the hot one with the abs and the hair and the eyebrows and all the burly things.

Charlotte has been selling loads of Samoa cookies by doing a little unsanctioned rebranding; according to Vice, the box of Samoas is now "Momoas" on account of the shirtless picture she taped to the front of the box and OK, I'll take 12 please.

I'm not the only mom out there who is suddenly ravenous for cookies that were once, like, my fourth or fifth favorite. As Charlotte's mom told KUSA, "The moms are getting really excited, and they're saying that they need them."

Are you wondering exactly how strong Charlotte's sales are in the Momoa department? Well, USA Today reported that she is a Top Cookie CEO for the Girl Scouts because she has been selling the most cookies. Also it feels important to point out that some of the other Girl Scouts have apparently been going to the fifth-grader to ask for boxes of Momoas to sell themselves, also reported by USA Today, which should tell you everything you need to know about her prowess.

Not to mention the selling power of Jason Momoa when he's topless... Just in case you needed to be reminded, here he is again. This time with sexy eyeliner.

A tip of the cap to both of these brilliant girls, in my opinion. Equally savvy, yet one of these boxes of cookies also contains a shirtless picture of Jason Momoa, so I think I know where I would like to spend my hard-earned cookie money.