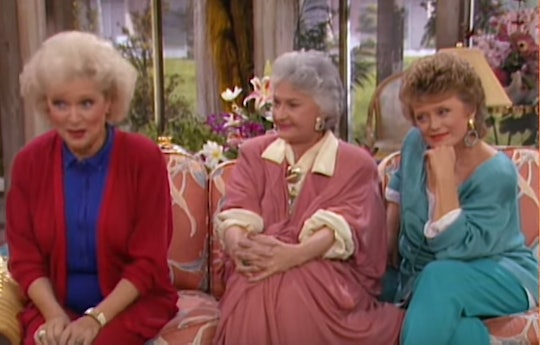 I have a dream shared by many and it is simply this: To live for one day like Blanche, Dorothy, Rose, and Sophia from The Golden Girls. The late-night talking sessions, the food, the razor sharp wit. and mismatched patterned furniture. Well, good news, it looks like this Golden Girls-themed Airbnb is here to make all our dreams come true. So get your best friends together and start planning a weekend in Oklahoma.

The classic television series about a group of four retired single women moving in together in a Florida bungalow is one of those shows that is just as beloved today as it was then. For one thing, in 1985 it was decades ahead of itself by prioritizing the friendship between Rose, Blanche, Dorothy, and Dorothy's sassy mom Sophia rather than casting them as sad old women who need to find a man. The romantic entanglements on the show were never the point, it was all about these four very different women and their connections with each other.

So it makes sense that any group of women looking to get in some bonding time will jump for joy at the prospect of visiting a Golden Girls-themed Airbnb, particularly since it is situated on the very same property of the childhood home of one Rue McClanahan, aka Blanche Devereaux herself.

The Golden Girls Guesthouse is located in Ardmore, Oklahoma, according to the posting on Airbnb, and has apparently become a real hotspot for girls' getaways. There are three bedrooms, one bathroom, and more Golden Girls memorabilia than a person can even imagine.

Guests are greeted with a chalkboard sign that naturally reads "Thank you for being a friend," while there are framed drawings of each of the characters in the bedrooms. One of Dorothy and Sophia sitting together with the words, "You're a pal and a confidante," and one of Rose wearing a sash that reads, "Omanway of the Earyay," or Woman of the Year for those who didn't converse in something called "pig latin" as children. Rose Nylund apparently studied it at college, so there you go.

The guesthouse is decorated in the same iconic palette of coral, turquoise, seashells, and any floral pattern the four women could get their hands on, so it feels especially authentic. The guesthouse rents for around $215 per night in the summer, which is very reasonable when you split it among friends.

My advice? Stock up on some cheesecake and potato salad (in a nod to Rose, of course), get three of your closest women and treat yourself to a holiday. They'll thank you for being a friend.