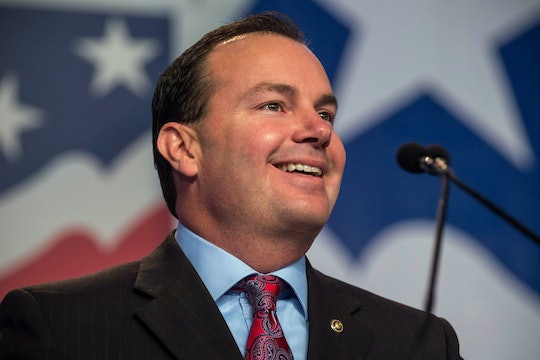 I live in this world where climate change is a thing you notice every day. You notice it when the birds come back earlier every year for spring, when the snow and ice are so severe you start to worry it's just never going to end. When it's warmer than it should be, when crops change and the oceans rise. In this world I wouldn't say no to a real, radical solution that might keep my kids alive on a sustainable planet, call me strange. Or call Utah Sen. Mike Lee strange, because this GOP senator's solution to climate change is something you likely haven't heard before.

Romper has reached out to Sen. Lee's office for comment and is waiting for a reply.

Senator Mike Lee took to the Senate floor on Tuesday to share his response to the Green New Deal, an aggressive Democratic bill co-signed by rising star and New York Rep. Alexandria Ocasio-Cortez to combat climate change and work towards making the United States carbon-neutral by 2030, as per Vox. Sen. Lee brought along some interesting props in what one can only assume was an effort to mock the Green New Deal, and perhaps unsurprisingly, he bombed pretty terribly.

That's what happens when you try to use a picture of former President Ronald Reagan riding a dinosaur with a gun as a gag, I guess. You win some, you lose some.

According to Business Insider France, Lee really wanted to drive home how unimpressed he was by the Green New Deal that so many Democrats have already supported as a realistic proposal to slow climate change and foster economic inequality. As he explained during the procedural vote for the Democrat's Green New Deal:

Unlike some of my colleagues, I'm not immediately afraid of what carbon emissions unaddressed might do to our environment in the near-term future, or our civilization, or our planet in the next few years. Unlike others, I'm not immediately afraid of what the Green New Deal would do to our economy and our government. After all, this isn't going to pass. Not today. Not anytime soon, certainly.

I should note he also brought pictures from Star Wars and Aquaman for some inexplicable reason in an effort to mock the proposed bill.

The pair of resolutions, which were co-authored by Ocasio-Cortez and Sen. Ed Markey from Massachussets, calls for "10 Grand Challenges" with primary goals to eliminate greenhouse gases, introduce smart-energy power grids across the country, and eventually spur growth in clean manufacturing to create jobs, as per NPR.

Now if you're worried that Sen. Lee is going to simply turn down the Green New Deal without an alternate plan, rest at ease. He figures having babies and being married will fix climate change up in a jiffy.

As he said in a video shared by Justice Democrats:

The solution to climate change is not this unserious resolution that we're considering this week in the Senate. But rather the serious business of human flourishing. The solution to so many of our problems, at all times and in all places, is to fall in love, get married, and have some kids.

Obviously AOC herself had the best response of all.

Interestingly enough, the website Biological Diversity points to human overpopulation (also known as having kids) as one of the single greatest contributing factors to climate change. So I guess that means Sen. Lee's solution isn't quite as foolproof as one might hope.