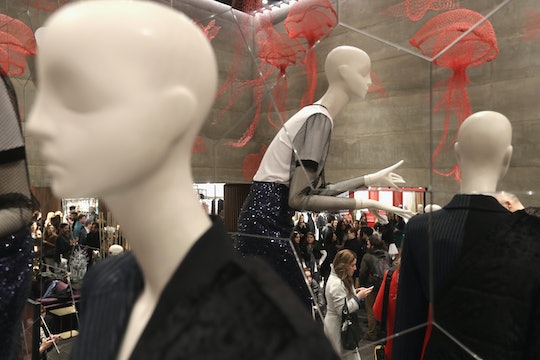 These Breastfeeding Mannequins Are Helping To Change Social Stigmas

It's still sort of amazing to realize people get weird about breastfeeding in public. I used to think it was a myth, this aversion some people have to (quite literally) the most natural nutrition on the planet, but I've seen the evidence myself. Watched a woman trying to breastfeed her child be asked to leave a restaurant, another asked to find a washroom to breastfeed her child. It's nuts. Thankfully, some advocates are on it, like this group using breastfeeding mannequins at a mall in Columbia to help fight the stigma.

The group, called Friends of Breastfeeding (or Amigos De La Lactancia in Spanish) created mannequins with a subtle difference: Each of the fully-clothed mannequins has one breast exposed and is "feeding" a tiny mannequin baby. According to its website, the group aims to:

... support moms who are attacked for feeding their babies in public. This initiative invites all Colombians to declare themselves as their friends and [ask] shopping centers to make them 100 percent breastfeeding-friendly territories. Friends can be all of us who want moms to feed their babies freely, and feel [safe] to do it in the place they choose.

The mannequins have been placed all over the mall to signify that breastfeeding can happen anywhere — on couches, standing in a window, etc. Perhaps because babies get hungry anywhere, and sort of don't care if other people don't want to see them eat.

According to People, the campaign has been a success so far, with mothers and babies frequently sitting down for a little breastfeeding time alongside the mannequins.

Perhaps, with any luck, the campaign will be such a success that it will spread all the way to the United States, where women continue to be shamed for breastfeeding their human children to this day. Take Ashley Cooper of Virginia, for instance, who was forced to leave a local mall while continuing to breastfeed her 8-month-old baby. Cooper caught the exchange (which naturally went viral, viewed over 140,000 times) on Facebook Live, saying in the video:

Security has just informed me I have to go into a nursing room, of which they have one, and it is currently occupied. I informed them that in the state of Virginia breastfeeding mothers can nurse anywhere that they are legally allowed to be.

If only Cooper had been able to point to a breastfeeding mannequin in solidarity. Maybe then she would have been allowed to feed her baby in peace and wouldn't have been shuffled out of the mall like a criminal.

A girl can dream, I suppose.