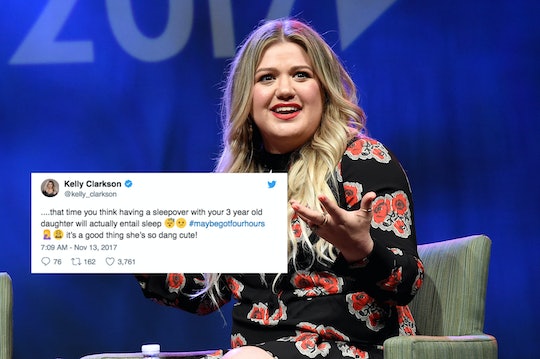 Kelly Clarkson is one of those celebrity parents who keeps it real at all times. Similarly to celeb moms like Pink and Brooklyn Decker, Clarkson regularly shares funny and honest tidbits about parenting, and many fans appreciate her candor. If you can't get enough of Clarkson's stories about what it's like to be a mom, you'll seriously love this hilarious photo of Kelly Clarkson's toddler. The photo is a perfect representation of #parenting, and there's a good chance it will crack you up.

On Monday, Clarkson took to Twitter to reveal a funny anecdote about her 3-year-old daughter, River Rose. Clarkson told fans that she and River had a sleepover the night before, and as any parent of a young child can imagine, the bonding moment didn't go as smoothly as she had hoped. For those of you who aren't parents yet, I have one word for you: toddler. Toddlers aren't fans of sleep or rest, at least not at the appropriate times. Toddlers also have a knack for feeling wide awake and rambunctious when you are at your lowest energy for the day, because of course. I could go on and on about a toddler's aversion to sleep, but you get the gist.

Luckily for fans, Clarkson was able to capture River in her element, and the adorable photo speaks volumes about what it's like to be a parent. In the funny picture, a wide-eyed and grinning River poses on Clarkson's bed despite the fact that the lights are 100-percent off. Apparently, nighttime holds no meaning or is of little consequence to River. I bet if you showed this photo to any parent of a toddler, they'd get it immediately.

Behold the cute munchkin that's keeping Clarkson up at night:

I have to admit that I genuinely laughed out loud at this photo. Whenever I look at it, I can hear someone saying, "Here we see the toddler in its natural habitat..." Everything about this pic is just too good.

Side note: isn't River a dead ringer for Clarkson? They totally share the same smile and expression.

As for Clarkson, she had mixed feelings about the sleepover. Clarkson captioned the shot, according to TODAY:

....that time you think having a sleepover with your 3 year old daughter will actually entail sleep #maybegotfourhours it’s a good thing she’s so dang cute!

Well, you got to give Clarkson credit for having hope. That's all the parents of toddlers can do, I suppose. Of course, Clarkson probably knew deep down that this sleepover was bound to go haywire, especially if she has ever watched the viral video of two toddlers partying the night away. It's common knowledge that toddlers love to rage.

All joking aside, it's really sweet that Clarkson arranged this sleepover in the first place, especially since River had some *feelings* when her younger brother, Remington, arrived on the scene in April 2016. Apparently, River did not like it when Clarkson would dare to hold her baby brother. So rude, right? A few months after Remington was born, Clarkson revealed, according to People:

She doesn’t like that. She is so jealous of that moment, but she loves him.

And as any parent knows of multiple children knows, easing the feelings of jealously between siblings is really crucial. In fact, Kyle Pruett, M.D., a Clinical Professor of Child Psychiatry at the Yale School of Medicine and Educational Advisory Board member for The Goddard School, said that spending one-on-one time with your child is a key way for them to feel important and "treasured" by you, according to Psychology Today. Translation: Clarkson is doing an amazing job with her two kiddos.

Although it's a bummer that Clarkson didn't get her seven to nine hours of recommended sleep, her struggle is so worth it. Not only did Clarkson get to spend some quality time with River, but fans got a hilarious photo out of the experience. Talk about a win-win.