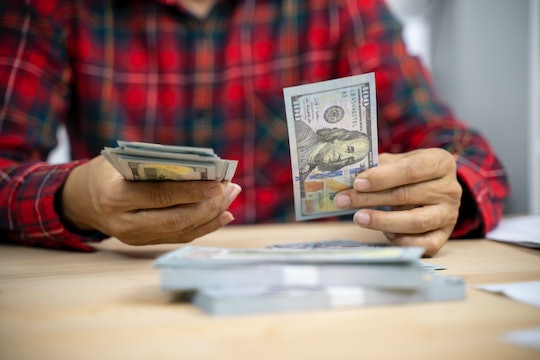 The concept of women protecting their own financial independence isn't a new one, but apparently one husband who was furious after learning about his wife's "secret" savings account didn't get the memo. The anonymous man took to the popular sub-Reddit group Am I The A**hole to share his outrage over discovering that his wife of four years had opened up her own separate bank account to save a portion of her income.

"I found out that my wife of 4 years has been having a secret savings account. I just went through financial documents in our house because something was wrong, and I figured it out," Reddit user u/AITAFinance wrote in a post Monday. "It opened up 4 years ago, and she’s been auto depositing 10% of her income every year. She’s saying it’s a completely healthy thing to do especially for women. She says that she wants to be secured if something happened to me or if I started abusing her."

While he noted in his post that he was upset about the fact that his wife had around $25,000 in savings that he hadn't known about, she pointed out to him that he could do the same. His response? "I then threatened to take 40% of my income (4 years times 10%) and put it into a separate account just for me. She’s now saying that’s financial abuse and called me an a**hole if I did that. I honestly don’t see what she’s thinking. She put 40% of her income and it’s been accruing interest."

According to the husband's post, his wife has since moved out to stay with a friend and he believes they are headed for divorce. "She thinks our relationship can’t work because she feels I’m 'abusive,'" he added.

The response to his post have been mixed, with some people understanding his wife's need to secure her financial independence. "It is extremely good advice for women to have an account like the one your wife has," one Reddit user commented. "Especially if the women has less money or makes less [than] her partner."

Another Reddit user believed that his decision to take 40% of his income and put it in a savings account was uncalled for. "If he wants to start an equitable account now, fine," they wrote. "Seriously denting the finances in retaliation IS financial abuse. She has no reason to feel guilty. His response PROVES her concerns valid. The first hint that he's not getting his way, and he wants to have a tantrum."

Financial abuse remains a valid concern for many people in relationships, leaving women in particular who might be suffering from domestic violence trapped when they do not have access to their own funds, as The Atlantic has explained. In fact, a survey conducted in 2019, according to CNBC, found that a "large number of American women" stay in unhappy or unhealthy marriages because of lack of financial security.

Choosing to open a "runaway account" has become a way to safeguard against potential financial abuse. In 2019, a different survey found that 50% of people in relationships had established a separate account in case they found themselves needing to leave the relationship, as the Daily Mail reported.

As one Reddit user commented on the man's post, they have exactly this sort of funds themselves, "This is great advice. As someone who was in an abusive relationship for years, I wish I had had this foresight at the time. I'm now married to an amazing man and I have an account like this. I call it 'Runnin' money.'"

In a perfect world, no one would ever need runnin' money or need to stay in a marriage they aren't happy in, but this world is not perfect.