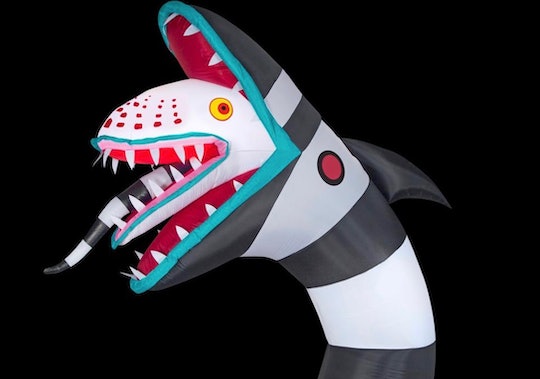 This 9.5-Foot Inflatable Sandworm From 'Beetlejuice' Will Make You Say, "DAY-O!"

This Halloween season, perhaps you'd like to forgo the usual cottony orange spider-web dangling in trees. Maybe you want something a little different than the Meyers next door, with their tasteful Pottery Barn-purchased tombstones, and their gauzy ghosts that look like small animals caught in a dryer sheet factory explosion. Maybe you want a decoration that's really going to make the Meyers sit up and take notice... Something that might even make them write the city council to complain? If so, might I suggest this 9.5 foot inflatable light-up sandworm from Beetlejuice?

This hilarious, towering beast is truly something to behold, and if there were some way to affix it to my Brooklyn fire escape, I certainly would do so. A striped, whimsical worm popping out of another striped, whimsical worm's mouth? It looks like it could be just as at home at Burning Man as on a suburban lawn, no?

This baby self-inflates, and has an animatronic tongue that moves side to side. (Yes.) It comes with a stand and tethers, so as to properly secure it, and avoid any airborne sandworm-related incidents. It's also an environmentally-conscious sandworm, as it uses energy-efficient LEDs. And if you're wondering what to pair with this unique bit of decor?

Well, I feel it's my duty to report that Home Depot also offers a life-sized model of Beetlejuice himself. You can prop him up on your porch and watch as he blurts out his most beloved catchphrases, while his head does full-on 360 spins. (I do however feel compelled to ask if the Beetlejuice model shouts "Nice f*cking model!"?)

I personally loved this movie as a kid, as I had a major crush on Michael Keaton. A crush that was in no way deterred by the fact that in the film his face is rotting off and his hair is pale green. I totally would have dug everything about these decorations. And probably would have tried to hone my making out skills on that spinning head model. So it's perhaps for the best that these items didn't exist in my day. I already have enough relationship issues. No need to add: "I subconsciously long for my husband's head to do a full 360 spin after kissing him" to the list.

However, I am curious about the younger generation's Beetlejuice knowledge. Do they actually know who he is? When they see a man in a black and white striped suit, do they not automatically think of Robin Thicke and Miley Cyrus dancing around and making America cringe? And if I say "sandworm," do they not think that's some new viral challenge where they eat gummy worms rolled in laundry detergent? No idea.

Anyway, the inflatable sandworm prices out at $179 at Home Depot. Which, yes, is a bit steep. (But did I mention the tongue moves?) Plus, you could always put blow this sucker back up at Christmas, and maybe tie a small Santa to its tongue. Or maybe throw some festive, over-sized antlers on its head? I bet the Meyers would love that.