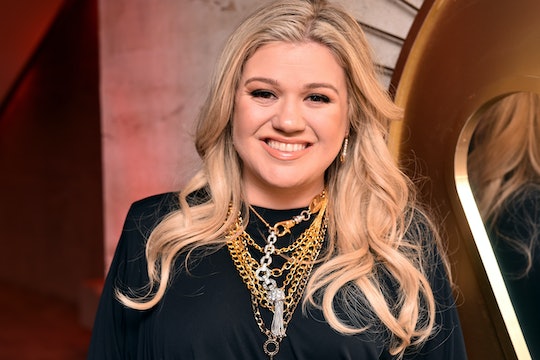 This Is How Kelly Clarkson Got Over Her Mommy-Shamers

As beloved as Kelly Clarkson is, she still has her fair share of critics. Case in point: In April 2017, Clarkson received a ton of criticism for allowing her then 2-year-old daughter, River Rose, to eat Nutella. Criminal stuff, right? Although it's never fun to receive flak for your parenting in the public eye, rest assured that Clarkson has developed a live and let live attitude towards her haters. And if you're wondering how Kelly Clarkson got over her mommy-shamers, the answer is pretty impressive. Not only does Clarkson have the patience of a saint, but she's also incredibly mature about the situation.

Ahead of The Voice's Season 14 premiere, Clarkson stopped by TODAY on Monday to chat about her responsibilities as one of the show's judges, and of course, her life as a mom of two young kids. Clarkson, mom to River, 3, and Remington, 1, spent the bulk of the interview discussing Nutella-gate and how that drama shaped her into the parent she is today. Apparently, Clarkson didn't even grasp that something so seemingly innocent could cause a whirlwind of controversy (some parents went as far to call her actions "child abuse"). In fact, Clarkson was first informed about the backlash from her mother-in-law, Elisa Gayle Ritter.

Clarkson recalled, according to POPSUGAR:

I didn't know about it for almost a week. My kid had Nutella on toast and you would've thought I literally fed my kid cancer. I didn't even know it was happening for five days, and my mother-in-law was like "So, the Nutella thing." And I was like, "It's good. What are we talking about?" I had no idea, and she informed me in my kitchen that the world hated me and thought I was going to kill my child. I was like, "What?! I didn't give her rat poison."

So, how was Clarkson able to move past all the naysayers and get on with her life? Look no further than Clarkson's beloved mom, Jeanne Taylor. Clarkson revealed that Taylor's "hard" parenting style gave her the confidence to ignore the chorus of negative people in her ear. Clarkson shared, according to TODAY:

How I've been able to handle this industry and what has been thrown at me, I can't thank her enough. She was the perfect mom. I don't think there's a perfect mom; I think there's a perfect mom to mold their kids for their situations. I thank my mom every day, because I wouldn't have been able to handle the criticism and flat-out "I hope your baby chokes on its umbilical cord and dies" tweets. You're like "have a nice day, God bless." My mom was a hard mom. She was like "Get up, try again." I think it really served me well.

Not to mention, Clarkson has a carefree attitude when it comes to criticism and she's not afraid to take a stranger's perspective to heart if it's put forth in a positive way. It's much easier to handle feedback when you're openminded, right? Clarkson revealed, according to TODAY:

Even with politics, if somebody disagrees with me, I'm like "That's totally cool, but I'd rather you not get violent about it and just express to me why you think otherwise." Even this one person put "Well, this is what's in Nutella" — they were explaining it to me — and it made me look into it. I try to teach our kids to at least turn it into a positive and keep an open mind, but then sometimes trolls are going to be trolls.

Yep, Clarkson really hit the nail on the head when she said there will always be trolls. As a celebrity, it's important that Clarkson recognized this truth because if she didn't, she'd probably spend valuable time obsessing over the negative commentary. It's also incredibly mature that Clarkson is willing to listen to others, as there might be instances when she could learn a thing or two from a fellow parent. It goes without saying that no parent has all the answers.

But just because Clarkson is not sweating her haters, it doesn't mean she can't throw them some low-key shade their way from time to time. Just a month after Clarkson was mommy-shamed for feeding River Nutella, she took to Instagram to debut her family's new favorite treat: an organic and dairy-free cocoa spread. "My family's new favorite thing on the planet!! So good," Clarkson captioned the snap, according to Instagram.

Following the message, many commenters took to the post's comments section to praise Clarkson's tongue-in-cheek response to the incident. "just shaded all her mommy shamers again with an organic version of Nutella! This is why I live Kelly so much! #fierce #burn #hatersgonnahate," one fan wrote. Someone else added: "This is funny @kellyclarkson … passive aggressive - good work!"

Yep, I think it's safe to say Clarkson has this whole parenting thing on lock. Bravo.