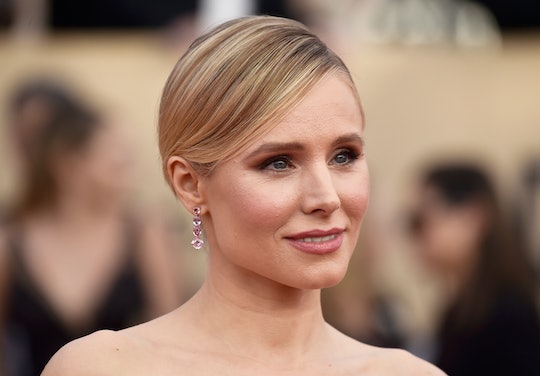 This Is How Kristen Bell Teaches Her Daughters Feminism, & It's Seriously Brilliant

As if you needed any more proof that she's the mom friend of your dreams, wait until you learn how Kristen Bell teaches her daughters feminism. It's the perfect way to handle all those problematic princess stories that kids are subjected to, and the best part is that it's endorsed by an actual Disney princess: Bell uses fairy tales to introduce her kids to feminism, and it's a great idea. Those of us trying to raise woke kids in the 21st century have to critically examine the media we present to them, and for some of us, that might mean avoiding fairy tales entirely. But unless you're homeschooling your kids on a desert island with no TV, some of those classic stories are bound to seep into their consciousness.

Whether it's at school, through friends, or a well-meaning old-school grandparent, kids will likely stumble upon a fairy tale from time to time. Even princess-free children's books and movies still often follow the tired formula of the hero being rewarded with a kiss at the end, implicitly teaching kids that women are prizes for men to win, and girls' ultimate aspiration should be to get someone, anyone, to put a ring on it (provided that "anyone" is a man, of course). If they see this theme over and over again, they may start to internalize it and believe it's normal.

It even happens in Bell's own princess movie, Frozen. Although the 2013 film has been lauded for containing the line "You can't marry a man you just met" (very progressive), and the way that the fabled "act of true love" that saves the day turns out to be the love between Bell's Anna and her sister, Elsa, Anna still gets a man at the end, according to Medium. Rather than shielding children from such stories, we can use them as teachable moments and analyze them with our kids, which will help them to develop their own critical thinking skills.

"I see a lot of books my daughters are given, and it's all about the prince wanting to marry the princess, and all he does is kiss her, and she says, 'Yes!'" Bell told Us Weekly. That's when she encourages 3-year-old Delta, and Lincoln, who will turn 5 next month, to question the characters' motivation:

While your mother-in-law might shrug off such an idea, and argue that fairy tales are just stories, Bell's lesson to her daughters actually has real world implications. Granted, a prince will probably never show up on their doorstep with a veil and a priest, but the message here is clear: women have agency. A princess doesn't have to marry a prince she doesn't want, and a real girl doesn't have to do anything with a boy that she's not comfortable with, even if he asks nicely — or even if he somehow saved her life.

Teenage girls are pressured into "going farther" than they want by their peers, while adults tell them that they must stay "pure" for marriage (see Trump's funding of abstinence-only sex-ed, according to Refinery29), and nobody's bothering to ask them what they want to do with their bodies. Little girls are forced to kiss their grandfathers and uncles, and sit on Santa's lap at the mall. Grown women wear earbuds on the street to avoid comments from strange men, and give out fake phone numbers rather than saying they're not interested. How different would our culture be if everybody was raised to understand that a woman can say no, and that a man should accept her answer?