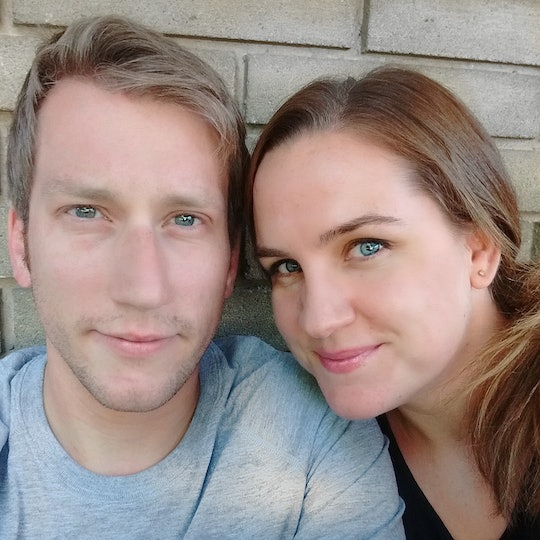 This Is How My ADHD Affects My Marriage

This morning I took my very first dose of Vyvanse, a drug designed to help treat attention deficit hyperactive disorder (ADHD). That's something I never anticipated ever saying, because it was only in the last year that I even ever considered that I could have ADHD, let alone need to be medicated for it. But a few months ago, when I explained what I'd learned so far about the disorder to my husband, and first brought up the idea of discussing it with my doctor and potentially trying medication, it was like a lightbulb turned on his head. "That makes so much sense," he said, quickly drawing all the same connections I'd already come to about why I seemed to be perpetually struggling with seemingly easy tasks. "It definitely sounds like it'd be worth a shot."

More Like This
Therapist Says: Alone Time For Moms Is A Necessity, Not An Indulgence
Vaccinated People Can Ditch Masks. Where Does That Leave Kids?
30 Quotes for National Brothers' Day
The Nonmonogamous Moms Next Door

Listening to him weigh in with his own opinions about what I'd read, and then expressing the frustration he sometimes feels over my scatterbrained, disorganized, flighty behavior (which he'd mostly always kept to himself) made me realize that I wasn't the only one who had noticed, very acutely, how much trouble I was having. And it also made me see pretty clearly how my ADHD affects my marriage. Even though I was the one with the symptoms, we both had to deal with the consequences.

Like many people, my understanding of ADHD had pretty much always been limited to the idea that it was something young boys were diagnosed with when they couldn't concentrate or sit still in school. But I had no problem sitting still in school, and even more than that, I was an excellent student. I had friends, my teachers liked me, and I pulled off good grades without necessarily trying all that hard. So I assumed that naturally disqualified me from ever even considering that something like ADHD could be behind the multitude of struggles I was having as an adult (I spent almost the entirety of my twenties carrying a painful burden of mental illness, and chronic, physical illness too). But then, one day, I realized my misunderstanding of what ADHD really is could have been preventing me and my doctors from treating the source of all my difficulty effectively.

Through it all, he's adapted to try and help however he could — as a source of emotional support, of course, but also by trying his best to pick up the seemingly endless slack generated by what I now realize is my ADHD.

After years of battling intense hormone swings and crippling symptoms, I was finally (finally!) diagnosed with premenstrual dysphoric disorder (PMDD). For me, the diagnosis itself didn't actually mean much in terms of my treatment options, but it did give me a better understanding of why I was having such an incredibly difficult time every month — and it also, inadvertently, led me to finding out about ADHD. I'd joined a Facebook support group for women suffering with PMDD, and on one difficult day, I posted an exasperated message on the group feed about how I was feeling. I wrote about feeling frazzled and like my brain wasn't functioning properly, just totally forgetting about two separate medical appointments I'd booked and had written down in multiple calendars to try and remember. I wrote about feeling lazy and anxious at the same time, and just fed up with myself and my inability to actually get anything done. And then a fellow PMDD mom left an incredibly valuable comment: "You sound like me, except I have ADHD."

After chatting back and forth with that mom to learn more about whether we actually did have a lot in common, I launched into a little Google research and found that, well, pretty much everything I knew about ADHD was wrong. I learned, for example, that ADHD presents totally differently in adult women than it does in young, hyperactive little boys (and that, specifically, many women with ADHD aren't even particularly hyperactive, but more so that they struggle with inattention and difficulty focusing and remembering). I learned that women who have ADHD are often highly disorganized (check!), scattered (check!), introverted (check!), and struggle with feeling consistently overwhelmed by life (check, check, check!).

I recognized myself in other women's stories, ones that spoke of being great students in school when they were young and had lots of structure and routine, but falling to pieces when they were on their own, responsible for making sure their bills got paid on time, or that their work got done, or that their kids had clean laundry and dinner on the table every night. In fact, I realized that, before I became a mother, I'd mostly been able to work around my insane lack of organization, my impulsiveness, my inability to do the same job or live in the same place for more than a year or two. But once I had children? Well, it became painfully clear how useless I was at getting my act together.

But what he knows — what we both know, finally — is that wanting to take care of my stuff has nothing to do with it.

This was the part my husband, Matt, understood all too well. He's loved me and stuck by me since we were a couple of high school kids, and that meant he's seen me through bouts of depression, some painful chronic health problems, a handful of short-lived jobs, and one week-long stay in the psych ward after my depression had turned into thoughts of suicide. And through it all, he's adapted to try and help however he could — as a source of emotional support, of course, but also by trying his best to pick up the seemingly endless slack generated by what I now realize is my ADHD.

Matt is in charge of all the bill-paying and anything to do with finances, because if it were up to me, I'd forget to pay them on time, or forget about them altogether. Matt is in charge of reminding me to hang up my keys by the front door so I don't lose them again for the millionth time. Matt is in charge of making sure my roadside assistance plan gets renewed, because he knows it won't be long until the next time I manage to park my car and lock the doors with the keys still hanging in the ignition. And when important forms or papers are sent in the mail with my name on it, they always end up on Matt's desk, because he knows they'll otherwise just get tossed in with all the other random papers and books on my desk, never to be seen again.

But despite his understanding, despite his acknowledgement that I really don't want to be like this, sometimes I know he struggles. He tries to ignore the fact that the house is disorganized because I leave my things everywhere, and he tries his best to roll with it when I decide on a whim that I'm going to paint the house or pierce my nose or cut my son's hair because I just watched a DIY tutorial on YouTube that looked interesting. He shakes his head when he gets home at night to find that, not only have I left my keys in the front door again, but that I've also left the driver's side door of my car wide open because I went to let our kids into the house, and then got distracted and forgot to go back outside again. He tries not to worry when I have to send yet another apologetic e-mail to my editor about missing yet another deadline because I just couldn't muster up enough focus to get my thoughts out coherently in the time we agreed upon. And sometimes, when he's had enough, and he sees that my new prescription sunglasses are sitting on the dining room table covered in melted gum because I'd thrown them in my junk-filled purse on a hot day, he'll ask, exasperated, "why can't you just try a little harder to take care of your things?!"

But what he knows — what we both know, finally — is that wanting to take care of my stuff has nothing to do with it. Like so many other women with ADHD, I want to be organized. I want to be able to remember my appointments and remember where I put my keys, and not forget what someone told me five minutes after they said it because I didn't realize I wasn't actually listening. I want to feel like a grown-ass woman who has her life together, but I can't, because, for whatever reason, my brain doesn't seem to work that way.

To be honest, I don't know if ADHD medication is going to help me. Deep down, I'm afraid it won't do a single thing, and that, worse, maybe the truth is that unlike everyone else, my symptoms really are my fault — that they're just a side effect of laziness and a spoiled lack of motivation. I still don't really know yet, and it might take a little while to see. But one thing I know for sure is that, as much as it's difficult for me to live with ADHD, it's difficult for my husband, too. And that's a burden we both share.