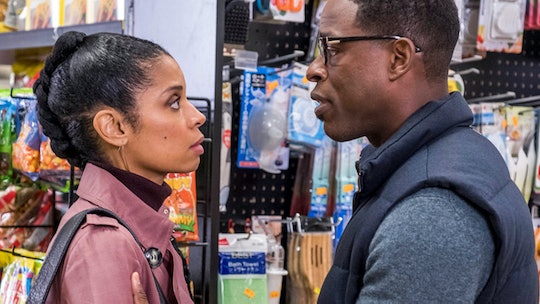 Fans Think Beth & Randall Might Get A Divorce On 'This Is Us' & No, I'm Not OK

Breakups and makeups happen all the time on network television — but that doesn't mean it hurts any less. This Is Us golden couple, Randall and Beth, have been hitting a rough patch for the entirety of Season 3, and it's all about to come down in the March 26 episode, titled "R & B." Fans at the This Is Us PaleyFest panel watched the episode prior to the episode's premiere, and it doesn't look good. While the episode offers a look at Beth and Randall's history, fans still came out stressed about the relationship. So, will Beth and Randall divorce? Fans seem to think that a split might be on the horizon.

Throughout the course of the third season, This Is Us fans had to sit and watch as Beth and Randall's relationship started to crumble right before their eyes. Both are trying to live their dreams and balance parenthood, which alone comes with its rewarding challenges. But this time, it's different. In the the episode titled "Don't Take My Sunshine away," Beth and Randall struggle to get their schedules to line up, and it's exhausting. I'll spare you the details, but eventually Randall leaves Beth a voicemail, telling her to "grow the hell up," after he assumed she wasn't coming to an important dinner. But, Beth shows up at the dinner.

When the couple arrives back at home, both parties are not having it, and suddenly, after months of passive aggressive actions against one another, they slam their bedroom door shut, and Beth and Randall decide to have it out. Yikes.

After the episode, a few fans went to Reddit to discuss the gross voicemail Randall left Beth. While most fans argued that Randall's comments didn't necessarily mean a breakup was coming for Beth and Randall, Reddit user exscapegoat pointed out that the repeated behavior could lead to a divorce.

"The comments are pretty harsh and this is the second time he said something harsh within 4 months," the Redditor wrote, referencing when Randall spewed out that he was "Superdad" to Beth in "The Last Seven Weeks."

"If it becomes a pattern, that's when it's divorce worthy or a deal breaker," the fan continued. "And I think it's troubling that he doesn't respect the fact that she needs some time and space to get over the 'teaching bored housewives how to twirl' and 'grow the hell up comments'. Those were pretty harsh words and he should respect the fact that she showed up for the dinner to support him and acted in a supportive manner. Instead, after a mere mealy mouthed sorry, he thinks he's right in angrily forcing the issue a few hours after he left that sh**ty voice mail."

Prior to the episode, Reddit user NoApollonia admitted that they want to see Randall and Beth split apart to illustrate a grander life lesson.

"Honestly, I kind of want to think they divorce," NoApollonia wrote. "Randall kind of deserves it at this point and Beth filing for divorce and divorcing him may be the only thing to finally make him realize he's been selfish far too many years and put his family on the back-burner far too many years. It may be why Tess seems to still have a good relationship with Randall. Hopefully he changed after a divorce, but it was just too late for him and Beth."

Then in the same discussion, another Redditor, nomadicAllegator, suggested that the couple might separate, but eventually get back together in the future. "I think they are likely separated," the fan wrote. "They definitely seem to be estranged in the flash forward, but someone mentioned that in an earlier flash forward Randall is still wearing his wedding ring. It makes sense to me that they would be having serious problems, but still with a chance to reconcile."

Fans fear the worst for Beth and Randall's relationship. And it's easy to see why. They're going through a lot, and it's getting harder to see them come back to the couple we knew back in Season 1. But, isn't the drama what makes great television?

In an interview with E! News, Sterling K. Brown, who plays Randall, revealed that there's more to couples than just sunshine and rainbows. Challenges need to be thrown at them to make them more dynamic, interesting, and ultimately a couple worth rooting for. "We wanted them to have a relationship that was worth of the #Goals that people put in front of us, but also have it be earned," Brown revealed.

He continued, "And by that what I mean is you have to see people go through something and hopefully make it through to the other side. That's the relationship you want to aspire to be. It's not going to be peaches and ice cream all the time, but if you can actually go through something, come out on the other side and love each other even more, that's goal worthy in my opinion."

Randall and Beth have always been my #1. They're going through a rough patch right now, but hopefully, Brown is right and the couple makes it out stronger in the end. For now, fans will just have to wait and see what happens to the fate of Randall and Beth in the final two episodes of This Is Us Season 3.