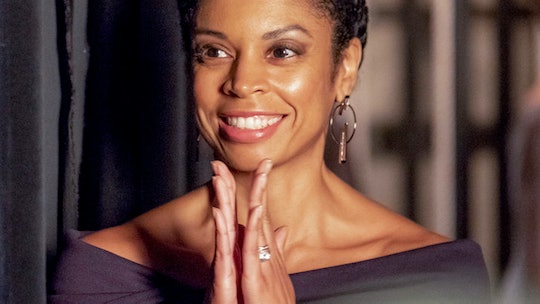 It's been a long summer, but get ready to bundle up in layers of emotion, because This Is Us returns for its fourth season on Sept. 24, and the NBC series has already warned fans about the twists and turns coming up in the next few episodes. Although viewers of the drama are used to jaw-dropping storylines, the show's cast and crew have teased quite a few This Is Us Season 4 clues about the premiere that will probably make you a little anxious for the Pearson family.

As per tradition, the Season 4 premiere of This Is Us will take place on the Big Three's birthday, according to Entertainment Weekly. However, the NBC drama will mix it up this year by splitting time between present day and the early '70s. And in the flashback, viewers will see Jack (Milo Ventimiglia) meeting Rebecca's (Mandy Moore) parents for the first time.

"There are going to be some family dynamics that enter the equation from my side, having to contend with my parents and their thoughts on him," Moore shared.

On the other hand, Jack is still dealing with trauma from Vietnam. "I’m curious to see how Jack boxes it all up and stuffs it away," Ventimiglia said. "And I think it’s going to be a process."

Although Jack's first encounter with Rebecca's parents will probably be terrifying, the events which take place in the present will lead to new changes in the future. Creator Dan Fogelman told EW the Season 4 debut will bring "restarts for everybody." Toby (Chris Sullivan) and Kate (Chrissy Metz) must adjust to their new lives with Baby Jack, who will be five-months-old in the premiere. Meanwhile, Kevin (Justin Hartley) moves to Los Angeles and he is newly sober. Randall (Sterling K. Brown) and Beth (Susan Kelechi Watson) are also make their move to Philadelphia.

Now, in writing, these storylines seem fairly simple — but don't let that fool you. It looks like the premiere will change everything fans know about the show. Brown even described the episode as "subversive," as it "broadens" the world viewers have come to understand.

That being said, the upcoming This Is Us premiere merely sets the tone for the rest of the season. When NBC dropped the poster for Season 4, the series promised fans an emotional ride for the fall. "If you think you know what's coming next... you don't know us" the poster read. Yikes.

The cast also revealed the fourth installment of This Is Us is "completely unexpected," according People's interview with Sullivan. "Wherever you think we are going, we are going in a completely different direction," the actor said. "The way the stories are unfolding is pretty amazing. Our writers and Dan Fogelman have done a pretty amazing job over four seasons keeping people surprised."

Are you ready for this devastating roller coaster, This Is Us fans? NBC is giving everyone a heavy heads up before the premiere airs, and not going to lie, I'm getting a little scared. Nevertheless, if there's one thing I've learned about being a fan of this drama, it's that you can never really be prepared for what's thrown at you. So stack up on the tissues. Season 4 is going to be wild.